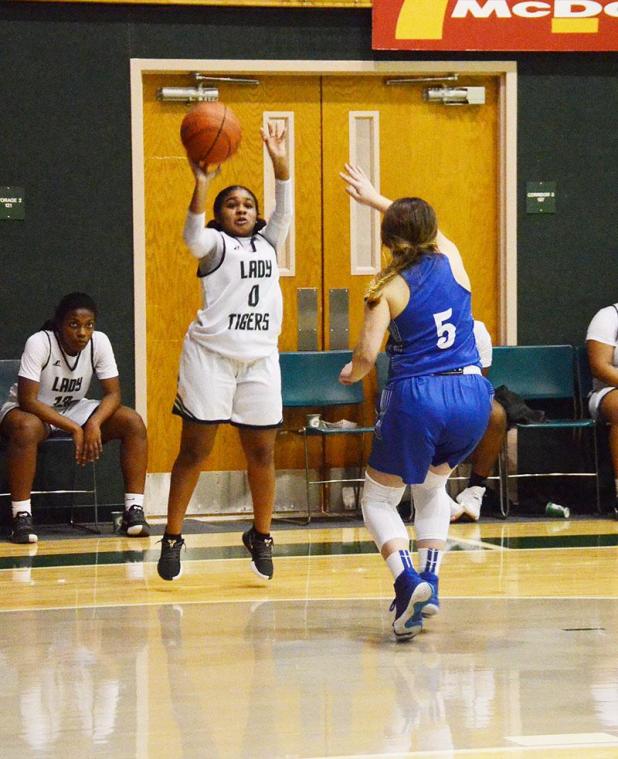 Looking at the Morgan City Lady Tigers’ record this season, one may call it a struggle as the squad has a 9-20 overall record and finished 0-10 District 8-4A action.
However, Morgan City Coach Duriel Singleton doesn’t see it that way.
“I consider it learning, because right now we’re so far behind just in general teams in our district with just basketball knowledge, and right now we’re learning,” Singleton said Thursday. “We’re learning how to be in the right places at the right time. We’re learning how to pass the ball. We’re learning how to dribble the ball. We’re still struggling with shooting the ball, because that really hurts us.”
Morgan City also has a young team and plays multiple freshmen.
While the team is playing multiple freshmen, they are getting experience for the future.
“I tell freshmen through juniors ‘you have that amount of years to mess up for your senior year to be great, so I want you to get out there and play as hard as you can, shoot as hard as you can, pass as hard as you can, just hustle and compete, and by your senior year, if you do that, you should be a better ballplayer,'” Singleton said.
This year’s Morgan City squad is led by junior Haylie Crappell.
“She’s tough,” Singleton said. “She’s a three-sport athlete. She’s great at all three of them, and she works her butt off. Earlier this season, she was kind of quiet, but around the third game, she started coming out of her shell. She started telling people what to do. She started driving the basketball, shooting the basketball more. She started becoming a leader, and it’s only gotten better, so next year should be a good year for her.”
Junior Nikeisha Paddio is someone that Singleton said is improving.
“She’s grown to about 6-foot,” he said. “Once she gets some endurance and strength under her, she’ll be real good. She’s a decent shooter. She’s still learning the game. She’s playing her butt off.”
The team’s ball handler, senior Nari Clark, plays with a lot of energy.
“She only plays in like two minute spurts because she plays at one pace and that’s full speed — offense, defense — where she just wears herself out too quick, and that just comes with not knowing the game, not knowing how to save your energy,” Singleton said.
Of note is freshman Ta’Lea Smith, who Singleton said has been playing “up and down” this season.
“The reason why I say up and down basketball (is) she was up before we started pressing,” Singleton said. “When I decided that I was going to change the tempo and the motto of our team from pass the ball around to we’re going to press and we’re going to out run you, her game went down because she’s always at the top of a press. She’s always, when we go box-and-one, she’s always on the best player, and right now, she’s so young (that) she doesn’t know how to just save herself and once she’s tired she’s done.”
However, Singleton said Smith’s playing quality basketball.
“All my freshmen, in general, just need to not be scared,” Singleton said. “They just need minutes of playing basketball.”
Other members of the Morgan City High School basketball team are as follows: seniors Sariayah Bourgeois and Wynesha Webb; junior Iesha Huntley; and freshmen Kailanni Francois, Jaela Robinson, Ireyell Dugas and Madelyn Poole.
While Morgan City is ranked No. 34 in the latest Louisiana High School Athletic Association Class 4A power rankings, the Lady Tigers fell twice this week, and Singleton said he is unsure if they will make quality as one of the top 32 teams in Class 4A.
“I don’t know because between 32 and 34 is like tenths of points. I just told the girls we’re going to practice Friday for Berwick, and we’re just going to listen out Sunday to see if we’re in or we’re not. If we’re in, we’re going to hit the gym Monday. If we’re out, we’re going to meet and then I’m going to let those who go to softball go continue playing softball and get those track runners ready to start running track,” said Singleton, who also is the schools track and field coach.