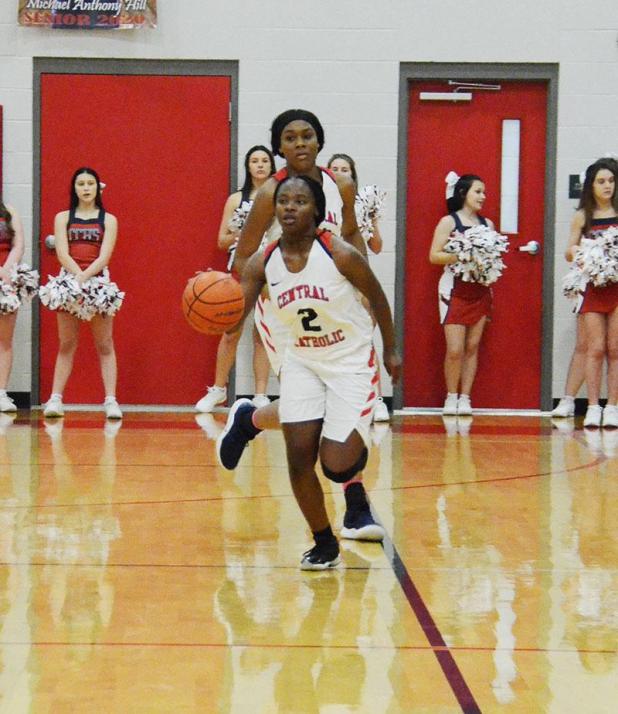 CCHS looks to knock off undefeated OCS in quarterfinals

No. 8 Central Catholic will look to take down Division IV’s top seed Thursday when it travels to Monroe to face Ouachita Christian in a 6 p.m. contest.
Ouachita Christian (33-0) has won 30 of their 33 games by double digits. The squad hasn’t had a game decided by single digits since a 41-37 victory against Cedar Creek on Jan. 7. Cedar Creek is the No. 4 seed and will face No. 5 Highland Baptist in the quarterfinals Thursday night, too.
Central Catholic coach C.L. Grogan said that Ouachita Christian, which has a solid eight-player rotation, has used a full court press to help them this season.
“The girls, they play well together,” Grogan said. “From watching them on film over the four games that we do have of them, all you do see is consecutively the girls playing hard defense. The offense comes with them playing hard defense, and they get a lot of buckets in transition.”
While Ouachita Christian may be undefeated, Grogan said his team is taking the attitude that they can go and give the Eagles, who play in front of nice crowds, their first loss.
“We feel like we have the quality of players to go to Monroe and get the job done, but we have to play together for all four quarters,” Grogan said. “It’s going to be a grudge match.”
Central Catholic senior Terre’Yan Johnson said the Lady Eagles (16-10) have had good practices since their 62-58 overtime win against St. Frederick in the regional round Monday in preparation for Thursday’s matchup.
“As we take that long ride, I think we all need to think about how we’re about to come out, what we’re about to do to win and beat the No. 1 seed,” she said.
In Monday’s victory, Central Catholic eighth grader Laurielle Bias hit two free throws with 2.9 seconds left to force overtime.
Asked how she was able to handle the situation, Bias said Wednesday: “Take deep breaths. That’s what I had to do. Take deep breaths. Our game was on the line. It’s either make these free throws or lose. We’re done.”
Grogan said his veteran players stepped up against St. Frederick and he expects that to continue Thursday. He said his younger guards have to be able to remain calm and handle Ouachita Christian’s defensive pressure.
Johnson said she thought the younger players did well against St. Frederick and expects that to continue Thursday.
Bias said she has to elevate her game for Thursday’s contest.
“I have to be the leader,” she said. “I’m the point guard, and the point guard runs the team, so without the point guard, we can’t do nothing.”
Offensively, Grogan said Central Catholic must have good shot selection.
“When we do take shots, it has to be the best shot possible for us at that time,” Grogan said. “We just can’t jack up shots just to jack up shots. We can’t get into a track meet with these ladies all night. We have to play our style of basketball, and we have to slow them down to our brand of basketball, which is a half-court setting, getting good shots with Yani, opportunities under the basket or get opportunities off Laurielle penetrating.”
The only team that the two schools have in common is St. Frederick. Ouachita Christian defeated it twice in District 2-1A play by scores of 61-45 and 68-32.
The winner of Thursday’s matchup will travel to Lake Charles for the Allstate Sugar Bowl/Louisiana High School Athletic Association Girls’ Marsh Madness at Burton Coliseum where it will face the winner of the game between Cedar Creek and Highland Baptist.
“Hopefully we can handle the crowd and we can handle the press, and we’ll see what the score is at the end of the fourth quarter,” Grogan said.