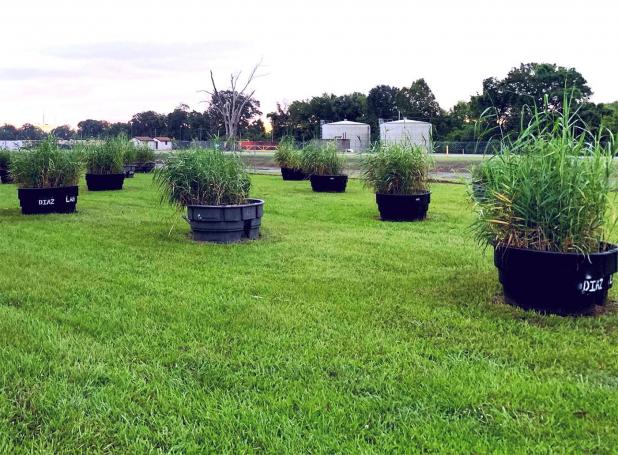 LSU AgCenter/Rodrigo Diaz
This roseau cane is being studied by LSU AgCenter entomologist Rodrigo Diaz and a team of federal and state scientists to determine what is causing the die-off. Diaz is subjecting these plants to a number of stresses like flooding, pathogens and variations in nutrients to look for causes.

Roseau cane continues to die off at the mouth of the Mississippi River with no known cause. But LSU AgCenter scientists are studying multiple possibilities.
AgCenter entomologist Rodrigo Diaz is leading a group of federal and state researchers who are looking at the possible cause of the die-offs.
“We’re looking at a number of possible causes, but we can’t be sure until we put the pieces together,” he said.
Diaz and the group of scientists began their study in 2016, when the die-offs were discovered.
When the group began their study, they were mainly interested in roseau cane scale, an insect known to damage the plant.
But later, other scientists joined to look at pathogens that may be responsible.
“We know the scale is responsible for some of the damage, but we are working to see if there may be something else that’s aiding the problem,” Diaz said.
Each member of the group has an issue they are assigned to examine and to determine how much of the problem it can be causing.
Hannah Broadley, a researcher from the U.S. Department of Agriculture, is leading a team to explore any natural enemies of the roseau cane scale in Asia.
Broadley recently visited Japan, Taiwan and South Korea, areas where the cane is native, to search for the scale’s natural enemies.
Scott Schneider, a USDA scientist, is looking at the genetics of the scale to determine the origin of the scale located here.
AgCenter coastal ecologist Andy Nyman is looking at what follows roseau cane dieback. He has found that after the die-offs, there sometimes is no roseau cane to replace it — just open water.
Other times, the roseau cane returns
Nyman is collaborating with the U.S. Geological Survey to use satellites to view images of the area that date back to the 1980s.
Ehab Meselhe, a scientist from Tulane University, is studying if channel dredging will be impacted by the absence of the cane.
“He wants to know what will happen if large stands of roseau cane die,” Diaz said.
“There are questions of whether there will be a need for more dredging once the cane is not there to prevent sedimentation in the navigation channel.”
AgCenter plant pathologist Rodrigo Valverde believes that more than one culprit is affecting the cane health. He is looking at the die-offs from a plant pathogen perspective.
Valverde is isolating potential pathogens from plants he’s collected and is growing cultures of some of them. His plan is to inoculate healthy roseau cane with the pathogens to see if they are causing disease or death.
“One thing that makes the entire situation more interesting is that there is not just one variety of roseau cane in Plaquemines Parish, but four: one from Africa, one from Central and South America, and two with European origins,” Diaz said.
Jim Cronin, a professor in the LSU Department of Biological Sciences, suspects multiple stressors could be affecting roseau cane health. He is studying host plant resistance and how the different varieties of cane handle stress.
“He is simulating various scenarios for the plants, including major stressors such flooding, insects, soil pathogens and nutrients to study the different varieties’ defensive chemistry,” Diaz said.
The team led by Diaz also is looking at population dynamics of the roseau cane scale.
“We have found that the scale can rapidly colonize the plants early in the spring, and by later summer almost 100% of the plants are infested. In addition, the roseau cane scale will not harm any other plant species, and three parasitoid wasps are responsible for up to 58% of the scale mortality,” Diaz said.
Using insecticides is not recommended to control the scale because scientists believe it will negatively effect the natural enemies.