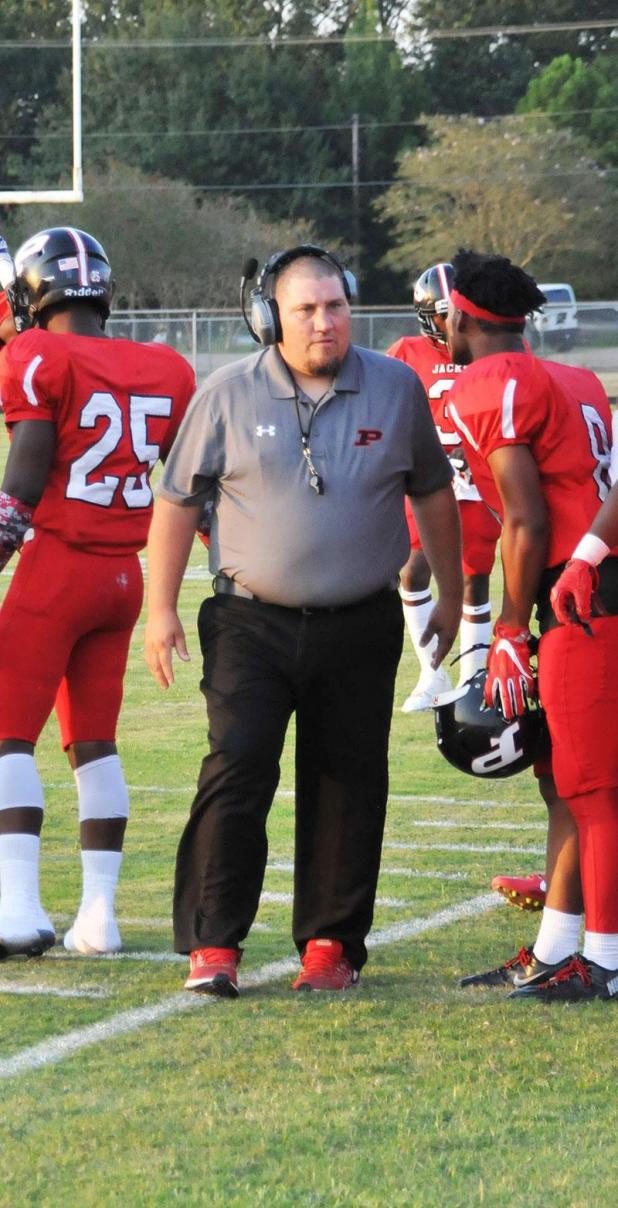 Ryan Stewart walks the sideline during week 1 action against Franklin High School. Stewart's head coaching tenure at Patterson High came to an end after just one season. He led the Lumberjacks to a 6-5 mark, a District 8-3A runner-up finish and to the first round of the Class 3A playoffs. (The Daily Review/File Photo)

Patterson’s coaching carousel continues to spin with the school seeking its fourth head coach in as many years as first-year Coach Ryan Stewart will not return for a second season leading the Lumberjacks.
The move, which Patterson Principal Lane Larive said was “a mutual agreement” was made just prior to the Thanksgiving break.
“I was the new principal, coming in as of July 1st,” Larive said. “When I got here, I’m going through things the way I think they should go, and he’s doing things the way he feels they should go.”
Larive said he and Stewart has some differences in agreement.
“So we got together after the season was over with and looked at our situation and decided that maybe it was best for us to part ways, and it was a mutual agreement,” Larive said. “He could stay on as a teacher, but he has decided to go, and I told him that if any school called about him, that I would be in full support of him. He had a good season here, and he did some good things with the team.”
The Lumberjacks finished the 2017 season with a 6-5 record and a Class 3A first-round playoff berth, falling to Iota 42-28.
“Lane and I didn’t hit it off immediately,” Stewart said. “There were some changes he made in his first couple weeks that I wasn’t excited about, and I brought them to his attention with no resolution. That’s why I feel this decision was made early on. I don’t think it was wins and losses. I feel things would be the same if we reached the quarterfinals. I had a feeling this was coming.”
The win total was an improvement from a season ago when the Lumberjacks finished 3-8 following a 0-6 start to that season under Louisiana native Marvin Dantzler. Dantzler resigned in November after one season. Stewart was an assistant coach under Dantzler.
“I thought the first season was good, but we had some bad too, and I’ll take it as a learning experience,” Stewart said. “There were some things that I and the team needed to do better, and some things related to coaching at Patterson that I learned the hard way.”
Stewart came to Patterson from DeRidder High School where he spent four years, including one season as defensive coordinator.
Before that, he worked as a college assistant.
Stewart, who interviewed for the head coaching job when Dantzler was selected, was named interim head coach after Dantzler’s resignation. He had the interim title removed a few weeks later by former Patterson Principal Rachel Sanders.
Larive, a Patterson native, has a strong football background, including playing on Patterson’s first Superdome team, playing collegiately at McNeese State and youth coaching experience.
“Patterson has a lot of tradition, so I’m hoping to get some applicants that have some experience with some good credentials so that we can make a change quickly,” Larive said. “Good coaches want to get in early to get their feet wet and get these guys going in the right direction. We are also looking for some stability, so I hope we can draw someone in our general region that knows our school and tradition.
“I think Patterson has been in a transitional period, and that’s the big thing that concerns me now,” Larive said. “But because of my history here, I think I know the heartbeat of Patterson. I know the community and how seriously they take football. Things are good but not quite right, so I feel like I’m going in search of the traditional Patterson coach that will respond to the tradition and culture we have here.”