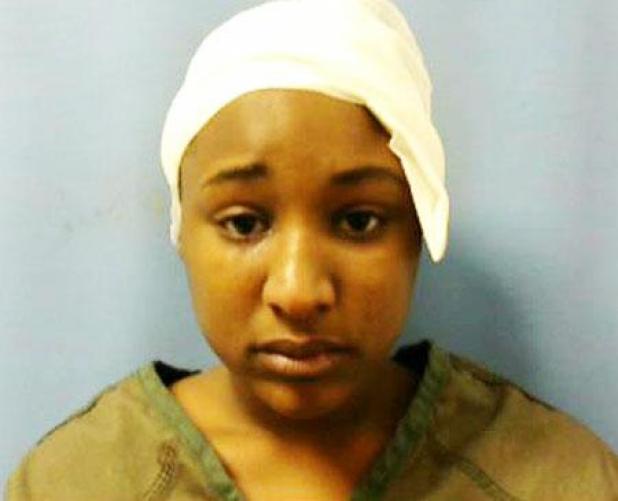 An 18-year-old Siracusa woman was charged with aggravated battery after she threw knives at her brother during a fight, St. Mary Parish Sheriff Scott Anslum said in a news release. The suspect’s brother was treated for a minor injury.

—Janaya Wade, 18, of Ciro Street in Siracusa, was arrested at 10:25 p.m. Wednesday on a charge of aggravated battery.

Deputies patrolling Siracusa were dispatched to a home on Ciro Street in regard to a fight. Upon arrival, the deputies located Wade. Through the investigation, the deputies learned that she had been in a fight with her brother and had thrown knives at him, which resulted in a minor injury, Anslum said.

Anslum reported that deputies responded to 46 complaints in the parish and reported the following arrests relating to east St. Mary Parish:

—Leonardo Thibodeaux, 27, of Chaparell Lane in Frierson, was arrested at 7:17 a.m. Wednesday on a charge of driving under suspension.

A deputy patrolling Bayou Vista was dispatched to a location on U.S. 90 to assist with a traffic incident. Upon arrival at the location, the deputy made contact with Thibodeaux and learned that Thibodaux was driving under suspension. Thibodeaux was arrested and released on a summons to appear Nov. 13.

—Aaron Cage, 27, of Third Street in Berwick, was arrested at 3:37 p.m. Wednesday on a charge of second-degree aggravated battery.

A deputy at the St. Mary Parish Law Enforcement Center was responding to a fight in one of the dorms. The deputy found evidence that Cage had hit another inmate with an object and knocked out a couple of his teeth, Anslum said. Cage was arrested and charged and remains incarcerated at parish jail.

—Kimber Thompson, 27, of Myrtle Street in Morgan City, was arrested at 4:55 p.m. Wednesday on a charge of remaining where forbidden.

A deputy patrolling Bayou Vista was dispatched to a business in response to a trespassing complaint. The deputy made contact with business personnel and learned that Thompson had come to the business where she was forbidden, Anslum said.

The deputy traveled to a home on Fourth Street in Berwick and located Thompson. Thompson was arrested and released on a summons to appear Nov. 13.

—Carl Naquin, 47, of Shrimpers Row in Houma, was arrested at 5:44 p.m. Wednesday on charges of speeding and driving under suspension.

A deputy patrolling the area of Patterson observed a pickup driving at a high rate of speed, swerving in and out of traffic. The deputy conducted a traffic stop and made contact with the driver, Naquin. During the stop, the deputy learned that Naquin was driving with a suspended license, Anslum said. Naquin was booked into jail and then released on $1,250 bail.

—Brittney N. Crouch, 32, of Fifth Street in Morgan City, was arrested at 11:03 a.m. Wednesday on a warrant charging her with child desertion.

Crouch was located in the area of Florence Street and arrested on a warrant. The warrant stems from an incident on Aug. 3, which alleges that Crouch was in an intoxicated state and a 5-year-old child in her custody was able to leave the home and wander the neighborhood. Crouch was jailed.

—James J. Naverre, 63, of Apple Street in Morgan City, was arrested at 3:14 p.m. Wednesday on a charge of simple battery.

Naverre was arrested at city court. Naverre committed a battery on an individual in the lobby area of the courtroom, Blair said. Officers arrived and Naverre was jailed.

—Bryant Francois, 36, of Federal Avenue in Morgan City, was arrested at 6 p.m. Wednesday on a warrant charging him with failure to pay fines. Francois was transported from the St. Mary Parish jail to the Morgan City Police Department on a Morgan City Court warrant. Francois was jailed.

—Edward U. Giroir, 24, of Egle Street in Morgan City, was arrested at 7:43 p.m. Wednesday on a warrant charging him with probation violation. Giroir was placed under arrest at his home on a city court warrant. Giroir was jailed.