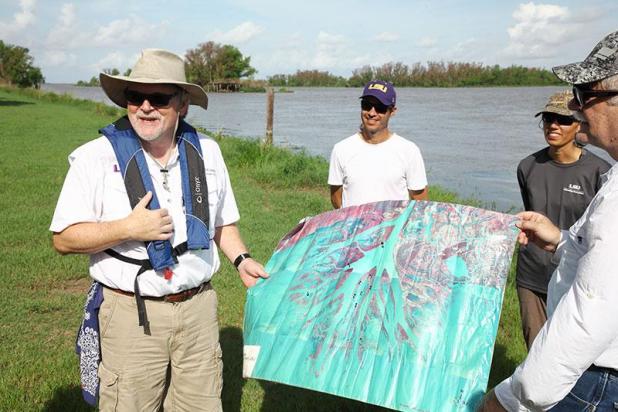 One of the things Robert Twilley, executive director of the Louisiana Sea Grant Program and professor of Oceanography and Coastal Sciences at Louisiana State University, likes to do is bring school kids to the Wax Lake Delta.
The Wax Lake Delta is actually one of two deltas that are part of the 137,695-acre Atchafalaya Delta Wildlife Management Area. Though the wildlife management area is mostly open water, the main delta at the mouth of the Atchafalaya River consists of approximately 15,000 acres of marshland, and the Wax Lake Delta, approximately 12,000 acres.
What’s unique about the Wax Lake Delta is that it wasn’t created by the effluent of the Atchafalaya River. Instead, the Wax Lake Delta was forged by the outflow of a manmade outlet dredged in the early 1940s as a means to reduce 30 percent of the flood stage discharge of the Atchafalaya River to alleviate pressure on the levees and therefore protect Morgan City and Berwick.
The Wax Lake Outlet was originally dredged to 45 feet deep. The outlet’s bottom spans 300 feet across. During extreme flood years, the outlet discharges 250,000 cubic feet of water or 1.87 million gallons per second.
Over the years, the Wax Lake Delta has been allowed to form unhindered with no interference from man. As a result, islands have formed over the past several decades. Twilley says, depending on their age, he is able to take students out to specific islands and tell them, “You’re standing on land that was born the same year you were.”
During a recent tour of Wax Lake Delta with Twilley, he explained how the islands consist of different elevations that easily can be understood by knowing the vegetation growing on them.
“One of our test questions that we like to give on exams to our Coastal Sciences students is we provide the vegetation types and they have to tell us what the elevation is,” Twilley said. “Or, we give them the elevation, and they give us the vegetation. It’s that predictable. All of the environmental resources out here really respond to that elevation.”
The islands on the Wax Lake Delta all have a unique “arrow” shape that Twilley mentioned is a result of a high rate of flow out of a very constrained channel similar to a fire hose, where the discharge is described as a “jet plume.”
The islands take shape and are birthed, if you will, in three distinct phases. The first or initial form is what Twilley and biologists refer to as the bayhead. Bayheads are the pointed areas where sediment deposition starts and forms an anchor point. They are always the oldest point on the island.
Once the bayhead is established, levees begin building along the sides with each subsequent flood, where the island eventually extends further and further out into the gulf.
Finally, the inner portion of the islands are the lowest points and do not build as much with mineral sediment as the levees do along the sides. Known as interdistributary bays, the interiors of the islands slowly begin to fill up with the production of organic vegetation, forming a muck or mud. But, eventually grow higher and higher.
The rapid growth and success of the Wax Lake Delta has made it an important ecosystem worth studying by not only LSU and other universities like UL-Lafayette, but by agencies such as the NASA Jet Propulsion Laboratory at the California Institute of Technology in Pasadena, California, as well.
Andre Rovai is a research associate with the LSU Department of Oceanography and Coastal Sciences who is working on a project known as “Delta X,” funded by the NASA JPL. The project’s mission, according to its website, is to study the natural processes that maintain and build river deltas like the Wax Lake Delta.
Rovai has placed water level recorders throughout the delta, recording data such as the hydroperiod, known as the time during which a wetland is covered by water.
“By using the water level recorders, we can calculate hydroperiods, and the reason we’re interested in knowing that is because plants respond to those flooding regimes,” Rovai said. “So, how much plants grow, where they grow, what species grow, are all relative to this hydroperiod.”
Rovai’s data is critical in the calibration of sensors being flown on NASA fixed-winged aircraft that eventually will be placed on satellites. Rovai says if the sensors show good results monitoring what they see on a regional scale here in the Atchafalaya and Mississippi River deltas and the Terrebonne and Barataria basins, then they can be utilized around the world monitoring wetlands.
With Louisiana’s issues with coastal wetland loss, the Wax Lake Delta’s success can be used as a model for creation of wetlands in other areas around the state. Dredging and pumping sediment by itself to create wetlands in the long run is not enough.
“Wetlands created by dredging sediment only, over time, is going to sink,” Rovai said. “So, the millions of dollars used to create that land are going to have to be put right back into it again in the future if you don’t have a source of sediment to maintain it. So, the use of river diversions to bring sediment to the coast and build new wetlands by complimenting dredging and pumping is preferred.”
Twilley points out the relationships between the type of discharge from a channel, the type of sediment and the type of islands that form also influence the type of ecosystems that develop on the islands. What’s more, as scientists learn more about those connections, they can influence the designs and restoration projects of the ecosystems they build.
“That is what’s so great about the Wax Lake Delta,” Twilley said. “It is a chance to build the design criteria for ecosystems that we then recreate (hunting and fishing), use for flood risk reduction (storm surge), remove excess nutrients (fertilizer in river water upstream, Iowa, for example) before they get to the dead zone, and of course, just the beauty of the delta.”