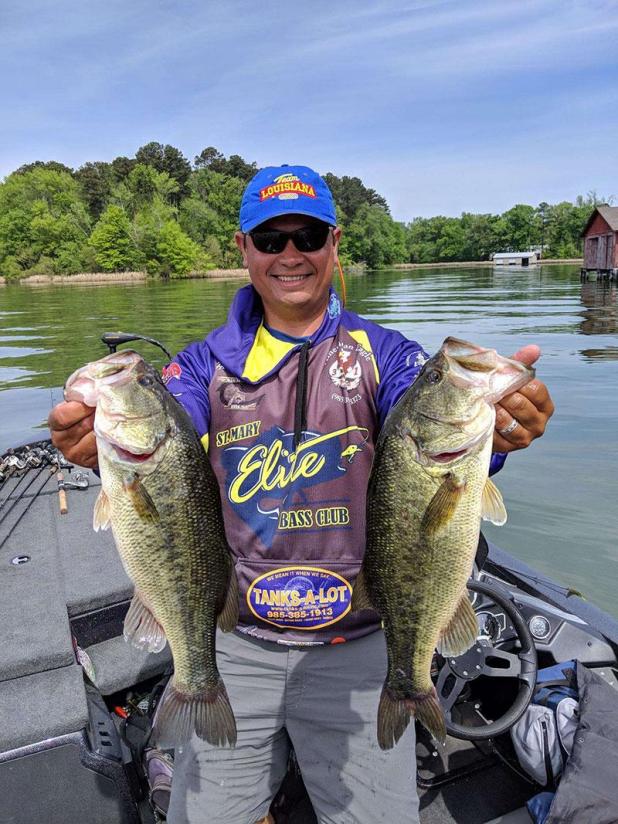 Howard Hartley with a catch of bass during a tourney
(Submitted Photo/Courtesy of John K. Flores)

Go back to 1994 when Pat-terson resident Howard Hartley was a senior in high school and the one thing you’ll learn about him is that he has always been a competitor. That year, Hartley quarterbacked the Berwick Panthers to a 9 and 1 record, the district championship and a trip to the quarterfinals in the state football playoffs. Berwick teams also played in the state basketball and baseball championships that year.
Hartley, now 43 and a family man working a full-time job, still has that competitive nature. Only now he utilizes it on the water fishing bass.
Hartley took fourth place overall in the BASS NATION’s Central Division Tournament April 19, in Guntersville, Alabama, and finished the highest out of the 10-member Louisiana State team to win a ticket to the BASS NATION National Championship to be held on Lake Hartwell in Anderson, South Carolina.
BASS NATION is consid-ered the grassroots of the Bass Anglers Sportsman Society. The winner of this championship tournament gets to fish in the BASS MASTERS CLASSIC, the Holy Grail of all bass tour-naments and something every competitive bass angler dreams of.
It’s not an easy road get-ting to where Hartley is. First, you have to qualify for and make the state team. Each state team is made up of 10 boaters and 10 non-boaters.
In 2018, Hartley earned enough points at Louisiana BASS NATION tournaments to qualify for the Louisiana State team as a boater.
“There’s a spring qualifier and fall qualifier, and at the end of those two tourna-ments, you pretty much have to accumulate enough points to finish in the top 10 overall to make the team,” Hartley said. “We’re talking probably 100 anglers or so, or better, on the average a year on the boater side to try and qualify on any given year.”
The Central Division that Hartley competed in with his Louisiana teammates is made up of 20 states. There’s also an Eastern Division and a Western Division.
Come November the St. Mary Parish angler will be competing against the best of the best.
Growing up, Hartley says he would go fishing with his brothers and mother, where they would mainly fish for bream and catfish. He also distinctly remembers when the bass bug hit him.
Another local angler, Ray Beadle, took him bass fishing when he was attending college at Nicholls State. Using a solid black plastic lizard, Hartley caught his first bass.
Hartley recounted, “I re-member thinking to myself, ‘I can’t believe I just did that. How could a bass eat something that’s not real?’ So, it became a game to me and that’s where the competition began – where it was me against the fish. I’d say, ‘I’m going to make you eat this bait, and if I don’t, well, I’m not good enough.’”
Over the years Hartley has made a lot of bass eat the artificial baits he’s tossed. He’s fished different bass circuits and has always been fairly successful. Moreover, he developed his skills enough to where the idea of fishing professionally has crossed his mind more than once.
“I had my opportunities to fish professionally. I wanted to, but I never took that route because I didn’t want to do it at the expense of my kids or family,” Hartley said. “And really, I’m still at that point.”
“I’ve kind of stayed locally with a passion to maybe one day fish professionally,” Hartley continued. “But, I couldn’t fish like I do now if I didn’t have a wife that supported me 100 percent. It also helps that my wife, Chere, loves to fish as much as I do.”
Though it’s the cheapest route, fishing the BASS NATION circuit, according to Hartley, is the hardest way to reach the BASS MASTERS CLASSIC. It’s also the longest, he said.
Hartley is also president of a 32-member local bass club called the St. Mary Elite. Besides the Morgan City area, the group tries to bounce around the state fishing other areas like Toledo Bend. They also periodically travel to Texas and fish Sam Rayburn Reservoir.
With his ticket to the BASS NATION National Championship punched, while riding home from Alabama, a friend said to Hartley, “You’re three good days away from making the BASS MASTERS CLASSIC.”
In hearing that, Hartley says it opened his eyes.
“Just like every other bass fisherman, my dream is to make it to the CLASSIC,” Hartley said. “I plan on giving it a 150 percent to make it happen this fall.”