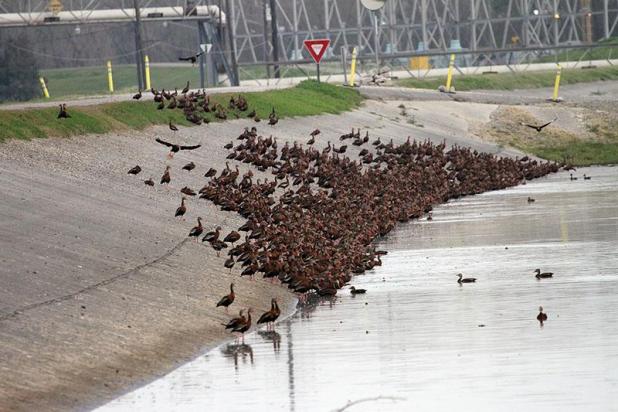 When the sun comes up in Westwego, you can see the high rises of New Orleans across the Mississippi River. As the morning glow slowly works its way up the Big Easy skyline, Clearview Parkway, Airline Drive, the Pontchartrain Expressway and I-10 are teeming with bumper-to-bumper traffic.
In this setting, most folks aren’t thinking about wildlife. Nonetheless, in the horizon trading back and forth between Westwego and places like Lafreniere Park in Kenner and Audubon Park in New Orleans are black-bellied whistling ducks — thousands of them.
Some 9 years ago, Louisiana Department of Wildlife and Fisheries biologist Paul Link became interested in the species after working with two other department biologists, Christian Winslow and Mike Pirro, who were banding them in Westwego along the Mississippi River.
What Link discovered when looking into the literature about the black-bellies was there was virtually nothing published on the ducks in Louisiana during the past 30 years and very little in Texas. In reaching out to Mexican counterparts, he learned there had been no formal survey conducted for them south of the border as well.
“Here’s this superabundant bird, right here amongst a half million people in New Orleans and we don’t know anything about them,” said Link, who is the Louisiana Department of Wildlife and Fisheries’ North American Waterfowl Plan coordinator. “That’s when I got interested, and from then on, it’s just kind of grown from there to what it is now. I’ve been averaging a little over 3,000 regular banded birds a year. And, I also do several hundred color markers.”
In collecting information through the years, Link says he’s assembled kind of a hodgepodge of various types of data trying to connect the dots and put puzzle pieces together to learn more about whistling ducks. In his attempts to obtain critical information on their migration patterns, 20 black-bellied whistling ducks also were fitted with implanted platform transmitter terminals, or PTTs.
Band recoveries, for the most part, were low, Link says. As a result, what the biologist and others theorized initially was black-bellied whistling ducks were making a reverse migration, going back south in the winter. Moreover, perhaps there possibly was reporting issues, where band recoveries were concerned, or conceivably the harvest was just that low in Mexico.
“Everybody suspected that that’s where they were going,” Link said, “They were coming up here in the spring and summer to reproduce and leaving. And, of course there were places like here in the city that keep them in large numbers during the winter and year-round. But what the telemetry data showed me is that they are basically transient residents.”
Essentially, Link says the ducks pair and leave the greater New Orleans area around April and ultimately disperse throughout the state, ending up in the bottomland hardwood and cypress-tupelo swamps.
Staying away from the Westwego area to ensure the telemetry data was unbiased and in anticipation of the hunting season, Link selected 10 birds in southwest Louisiana and 10 in the southeast. One of the 20 birds left the state and nested in the oak hardwoods near Waco, Texas, spending 90 days out west and returned to Louisiana. Another bird explored the Florida gulf coastline for a few weeks and returned to the state to nest south of Alexandria.
“They redistribute quite a bit across the state,” Link said. “A bunch of them nested in the Monroe area and the Lafourche River and Beth River basins, and that was the most informative things for me to learn.”
Out of the 20 black-bellied whistling ducks Link fixed with PTTs, 17 returned within a five-mile radius of Westwego two weeks before the hunting season opened. Two of the 17 wintered in Lafreniere Park.
One of the things Link says from reading Ducks Unlimited Mexico work is there has been a lot of wetland acreage loss in Mexico, where the black-bellied whistling duck population’s trajectory is on a downhill slide. It’s also possible, he says, they’re being displaced from their native areas. However, there’s still much to learn.
Black-bellied whistling ducks, like wood ducks, are cavity nesters often in direct competition with one another for nesting sites. Black-bellies also can be a nuisance in the city. They’re noisy, defecate on buildings and knock over bird feeders.
The antiquated grain elevators where they hang out offer the birds a ready food source along the Mississippi. However, Link theorizes the bigger reason they hang out in Westwego is more for the security than food.
Black-bellied whistling ducks can be harvested during the duck season as part of a hunter’s normal bag limit, but few are killed, resulting in low-band recoveries.
It is theorized that the species could offer some additional harvest opportunities in addition to the normal bag limit, similar to that of mergansers. However, before any additional harvest can be considered, biologists will need to have better population estimates, survival rates and vital statistics.
Additionally, another whistling duck, the fulvous, not only has similar traits as black-bellied, they share the same habitat. Like the black-bellied, there is limited information.
Also, both are nocturnal-crepuscular, where in the twilight, few hunters can tell what species they are shooting at or differentiate what the call (whistle) they make.
EDITOR’S NOTE: Flores is The Daily Review’s Outdoor Writer. If you wish to make a comment or have an anecdote, recipe or story to share, you can contact Flores at 985-395-5586 or at gowiththeflo@cox.net.