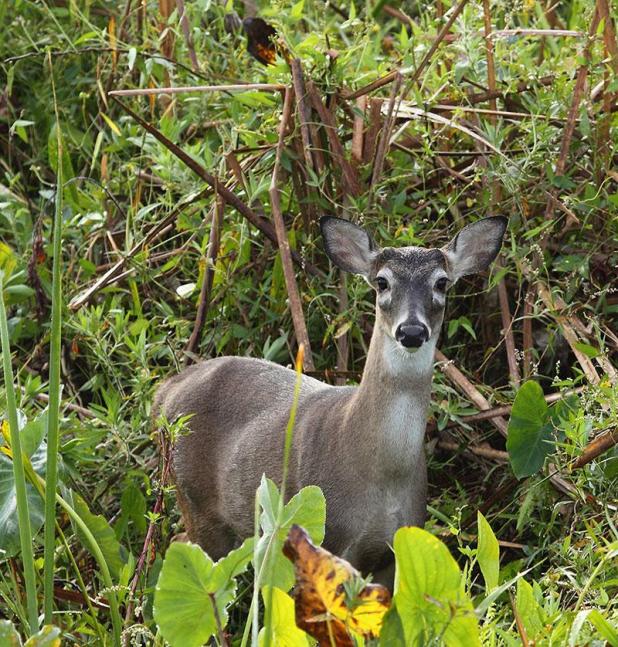 Lactation rates have improved the past two seasons, where younger deer recruitment has improved. (Submitted Photo/Courtesy of John K. Flores)

Each year, during the month of March, if you were to attend the Louisiana Sportsman Show and Festival in Gonzales, one thing you’d come to know is that deer hunting is alive and well in the Bayou State. The show annually holds a big buck contest and literally 100s of deer are scored by qualified judges.
At first blush, it’s hard to fathom there are that many big deer roaming the woods, swamps and marshes in our state. But, once you get over your brief moments of envy, you realize all it takes is patience on your part and perhaps, a little assistance from wildlife managers.
According to the Louisiana Department of Wildlife and Fisheries, one of the goals of the Deer Management Assistance Program is to offer interested hunters, landowners and managers in depth, professional level technical assistance in managing deer populations and habitats. What’s more, it seems to be working for those who have signed up for various tiers of the DMAP program.
In the 2017-2018 Louisiana Deer Report released Aug. 23, DMAP cooperators continued to harvest a high percentage (72 percent) of 3.5 year old and older age bucks. Moreover, that number was third best nationally in a most recent 2018 Quality Deer Management Association study.
The Louisiana Department of Wildlife and Fisheries report also says the last two seasons, DMAP harvest sex ratio has been almost identical, where 40 percent bucks and 60 percent does were taken. DMAP harvest during 2017-2018 on enrolled property was 13,147 deer.
One of the concerns biologists had two seasons ago was lactation rates when they dropped below 50 percent statewide. Lactation rates provide wildlife professionals data that helps determine recruitment (younger deer) in subsequent years.
It appears lactation rates have mostly recovered in 2018, where Louisiana Department of Wildlife and Fisheries Deer Study Leader Johnathan Bordelon predicts the 2018-2019 season will be a good one.
“At this time, we have no reason to believe next season won’t be a good one,” Bordelon said. “Lactation rates have improved slightly over the past 2 seasons, which points to improved recruitment. In addition, growing conditions have been fair to good for most of the state this year. While there are some dry spots, most of the state has received adequate rainfall this year to promote good growing conditions.”
Louisiana hunters harvested 135,100 deer during the 2017-2018 deer season. And, Union, Claiborne, Webster and Bossier parishes, which border Arkansas, were four of the state’s top 20 deer harvest parishes. Union led all parishes in the state with a harvest of 4,177 whitetails.
The Louisiana Deer Report points out the Louisiana Department of Wildlife and Fisheries manages more than 1.5 million acres of Wildlife Management Area property, holding modern and primitive firearm seasons, as well as archery for the purpose of keeping deer numbers in check. Harvest varies season to season with ups and downs, the report says, mainly due to habitat type, forest conditions, accessibility issues and other management objectives.
But, in general, Wildlife Management Area herds are managed to ensure long-term forest regeneration, diversity, sustainability and a healthy deer herd.
For the public, Wildlife Management Areas offer some fair-to-good harvest opportunities if hunters are willing to put in the time and do their homework. Some of the better Wildlife Management Areas to hunt, in terms of “efforts per deer,” in 2017 were Loggy Bayou (2.9), Camp Beauregard (4.4), Dewey Wills (4.5), Russell Sage (4.8) and Bodcau (4.9).
Hog populations and lactation rates continue to be areas of concern for biologists, but the biggest issue facing Louisiana’s deer herd is Chronic Wasting Disease.
Currently, there are no known cases of Chronic Wasting Disease reported in Louisiana. However, Texas, Arkansas and Mississippi have recorded cases, where in March 1, 2017, the Wildlife and Fisheries passed laws concerning cervid (white-tail deer, mule deer, elk, moose, caribou, fallow deer, axis deer, sika deer, red deer and reindeer) Carcass Importation.
No person shall import, transport, or possess any cervid carcass or part of a cervid carcass originating outside of Louisiana except: for meat that is cut and wrapped, meat that has been boned out, quarters or other portions of meat with no part of the spinal column or head attached, antlers, clean skull plates with antlers, cleaned skulls without tissue attached, capes, tanned hides, finished taxidermy mounts and cleaned cervid teeth. Any and all bones shall be disposed of in a manner where its final destination is at an approved landfill or equivalent.
On March 6, a ban on supplemental deer feeding in East Carroll, Madison and Tensas parishes went into effect in an effort to potentially curb the spread of Chronic Wasting Disease when it was discovered in Issaquena County, Mississippi, just 5 miles from the Louisiana border.
On June 7, a department press release reported no detection of Chronic Wasting Disease in those parishes, and the feeding ban was rescinded.
On Aug. 3, the Louisiana Department of Wildlife and Fisheries cautioned deer hunters in yet another press release about the use of deer lures because of the potential these products could contain Chronic Wasting Disease.
The 2018-2019 Louisiana deer season looks to be another good one with a deer harvest that will be somewhere just under 150,000 whitetails. And, no doubt, come next year’s Louisiana Sportsman’s Show and Festival will have plenty of trophy mounts from hunters looking for bragging rights. The question is, will one of them be yours?