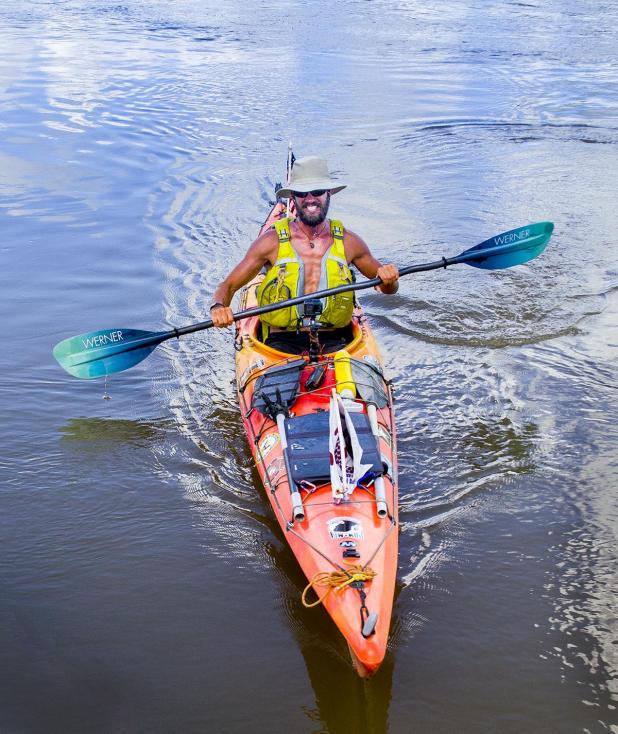 “There he is,” Megan Alkazoff said, smiling, as her boyfriend and project collaborator Greg Nejmanowski’s kayak slipped into view from the floating dock.
We began waving our arms and our American flags; and Nejmanowski, “Nemo,” waived his oar in the air, his smile visible even from 400 yards away.
From the middle of the fast-moving water of the Wax Lake Outlet, Nemo seemed as though he might relaxedly float right by the dock. But, with some easy strokes of his oar, he glided out of the current and over to where his family, Alkazoff, and I were gathered.
He slid over to the metal cleat at our feet, tied his kayak off, and was assisted onto the dock by Bruce Nejmanowski, his dad.
Before we boarded the dock, while waiting for Nemo, Bruce told me how enormously proud he was of his son.
Hugs were exchanged all around, from Tricia and Bruce: Nemo’s mom and dad; and Anne and Dave Boehm, Nemo’s aunt and uncle, as well as Alkazoff.
Kevin and Diana Shott, other supporters of Nemo, had driven from Illinois to see him as well. But due to Diana’s sprained ankle, they were unable to scale the levee separating the waterside property from Levee Road.
He had asked about them.
Tricia presented Nemo with a giftwrapped book.
“Which is it?” he asked.
“You have to open it and find out,” she returned.
He scraped the wrapping aside to reveal what looked to be a collector’s edition of The Adventures of Huckleberry Finn, complete with circa 1900s playbill cover art.
He thanked his mom and then set to providing our kinetic group with details of his previous days’ experiences.
Nemo has been kayaking the length of the Mississippi River in order to raise awareness and enlist support to end veteran suicide.
He is the Veteran Adventures Coordinator at Southern Illinois University’s Touch of Nature Environmental Center.
“I launched from Lake Itasca, Minnesota on May 25, and I’ve got one more day to go,” Nemo said Tuesday.
“The expedition I am doing is ‘source to sea,’ the source being where it (the Mississippi River) starts, in Lake Itasca, then along where it flows all the way to the sea.
“We are taking the Calumet Cut down to the Wax Lake Outlet, which is a winding river channel, and then on to the gulf… and that will be the end.”
He had stopped at the landing at Wax Lake Lodging not only to see his family, but also to meet up with Alkazoff, who kayaked the last leg of the trip with him.
Nemo said he did not think it would take any more than a day or so to reach the route’s conclusion. But he had scheduled a second day, if necessary.
The expedition had been born as Nemo and Alkazoff’s answer to VAC’s grant funding having been cut by the state of Illinois.
Up to last year, VAC had subsisted on those funds being available, by which to “offer life-changing and transformational expeditions and events free of charge to veterans.”
Now, the program must rely solely on fundraising and donations.
Through his “source to sea” fundraiser, Nemo hopes to reach his goal of $25,000—the amount considered necessary to carry on with VAC as done thus far.
As of Thursday, Paddle for Patriots, the official title of the expedition, had raised $16,800 with 22 days left to reach their goal.
“Our mission is to ease the transitions of veterans, from military life to civilian life,” Nemo said of VAC. “We help veterans re-adjust to life. We do that through powerful outdoor expeditions and events that draw on the healing powers of adventure, challenge, comradery and things like that.
“We offer events and these expeditions at no cost to veterans. We cover everything from food to gear, lodging, transportation and professional instruction, if needed. We do things like white water rafting, backpacking, hunting, fishing and clay pigeon shooting.”
He went on to say that the VAC is open to all veterans and active duty military who wish to take part. “It’s open to anyone. You just have to show up.”
After some photos and handshakes, and an invite from Bruce to take me hunting in Illinois, I hopped in my truck and back over the levee, to the road.
Heading across the bridge on US 90 over Wax Lake Outlet, I saw two kayaks shoving off from the dock below. I honked, and they waved.
To find out more about donating to Paddle for Patriots, go to: https://salukifunder.siu.edu/project/15565, or you can find videos, comments and testimonials at the Paddle for Patriots’ Facebook page.
For information on Touch of Nature Environmental Center, go to: https://ton.siu.edu/.