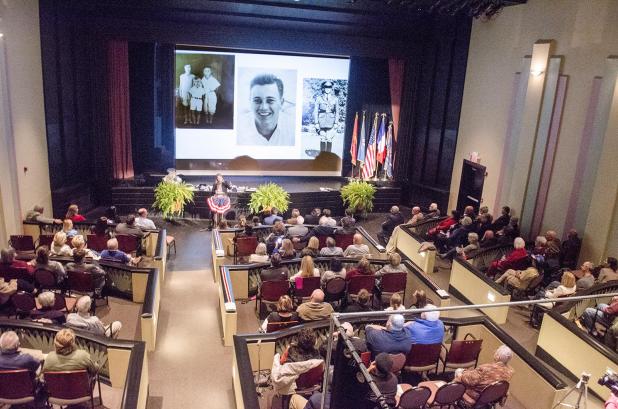 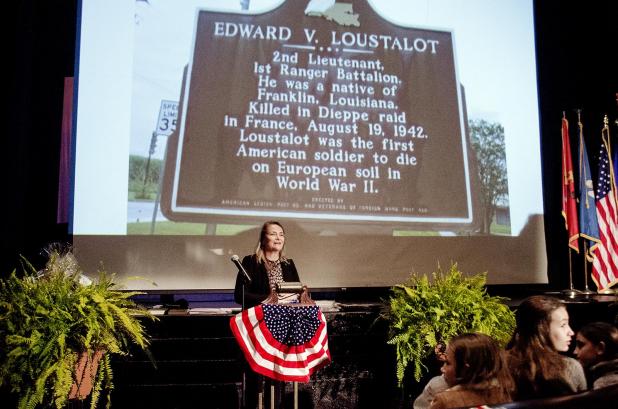 Diane Boutier, board administrator in charge of U.S. relations

From Franklin to France

The first of this year’s monthly bicentennial celebration events in Franklin took place Wednesday night at the Teche Theatre for the Performing Arts.
It was: “Operation Jubilee, Dieppe Raid, a Bicentennial Celebration of the Life and sacrifice of Army Ranger 2nd Lt. Edward V. Loustalot.”
Loustalot was the first American soldier to die on European soil in World War II, and he was a native son of Franklin.
The presentation was facilitated by Franklin’s Bicentennial Committee, in cooperation with Diane Boutier, board administrator in charge of U.S. relations, “Memorial du 19 Aout 1942,” Dieppe, France.
Boutier was the presenter of the program, which opened with welcomes from the town of Berwick, the Chitimacha Tribe of Louisiana, the St. Mary Parish School Board, Franklin’s Bicentennial Committee, and the City of Franklin.
Boutier said of Loustalot that even though he lived in Hammond at the time of his demise, he was born in Franklin, and his family home still stands at 203 Mechanic St.
She also said that a memorial to Loustalot is located in Dieppe, and there is an annual memorial observance every year on Aug. 19, the day of his death.
According to Boutier, Winston Churchill, prime minister of Great Britain during WWII, developed a plan to invade five deep water ports in German-occupied Northern France.
Churchill’s plan began with a trial run at Dieppe. This was Operation Jubilee, the disastrous allied raid of Dieppe.
Operation Jubilee consisted of 6,000 men comprised of Canadian volunteers, British Commandos, and 50 US Army Rangers, hand-picked for the mission.
Loustalot was aboard one of eight landing craft who were lost from their support fleet, and beat back a German battery to land on the beach at Dieppe.
After landing, Loustalot scaled a treacherous gulley, under heavy German fire, and was killed in action while rushing a German machine gun nest.
During the presentation, Boutier gifted several mementos to Loustalot’s family who were in attendance.
A memorial to Loustalot can be found on the southern side of the bayou, at the intersection of Willow Street (La. 3096) and Eastwood Drive.