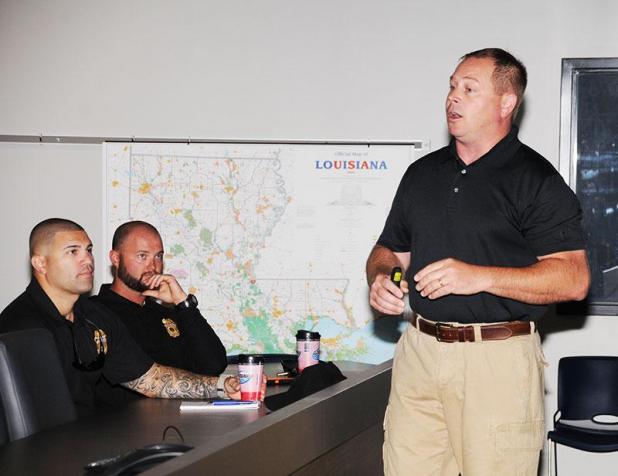 'See something, say something'

The public’s help is a vital tool that law enforcement agencies need in order to discover possible criminal activity within communities, an instructor said Thursday in Morgan City.

The training program is a federally funded, nationally responsive partnership involving the Department of Defense, the National Guard Bureau and the Florida National Guard, according to the organization’s website.

The course on advanced tactics of criminal interdiction was geared toward getting officers “to look beyond the issuance of a traffic citation,” when they’re patrolling roadways, Conner said.

His main message to the public regarding possible crimes is “if you see something, say something.”

People in the community know the area and what’s right and what’s not right, he said.

“All we ask them to do is to pick up the phone,” Conner said. “Don’t be afraid to call the police. Let the police do the investigation. That’s what we’re trained to do. It might not be something, or it could turn out to be something big.”

He hoped to be able to teach officers how to spot suspected criminals or criminal activity on the roadways.

He discussed tactics to identify all threats and crimes, not just drug-related ones. However, Conner said drugs are the “driving force behind a lot of the crimes that occur in our country today.”

Over 80 percent of all crimes involve the use of drugs, Conner said. The opioid and heroin epidemic “is out of control.”

“It’s not growing here in Louisiana,” Conner said. “It’s shipped here from outside of the country.”

The weakest link that officers can attack in the illegal drug distribution system is the transportation of drugs.

There are no secret techniques officers use to discover evidence of crimes, Conner said.

The training session provided law enforcement officers with information about what tools they have at their disposal to uncover potential crimes, such as conducting driver’s license and warrant checks along with doing scans of an area with canine units and asking for consent to do searches, he said.