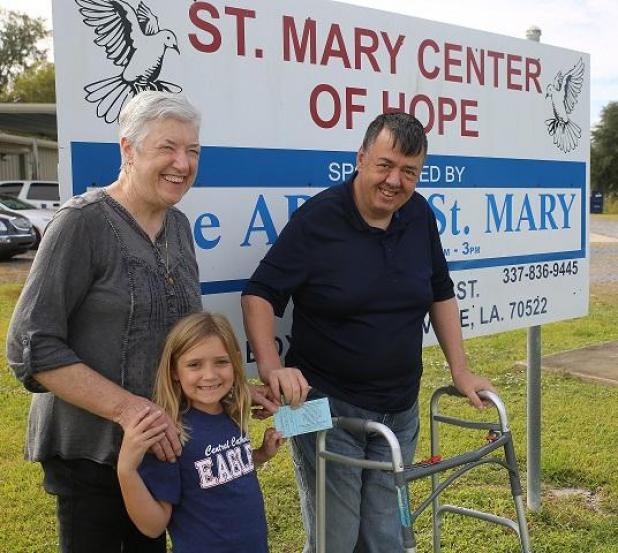 Katherine Callais of Berwick and granddaughter Evangeline, 7, get a Center of Hope raffle ticket from Telly Lasalle on Monday in Centerville.

Salesman of the Year

Mon, 11/04/2019 - 5:28pm
Telly Lasalle, Center of Hope participant, helps pay the mortgage
By BILL DECKER
bdecker@daily-review.com
For information on how to get raffle tickets, call 337-836-9445. The ARC of St. Mary/Center of Hope's new thrift shop on Main Street in Franklin will officially open at 11 a.m Monday

Willy Loman, the most famous salesman in American literature, talked about being alone out there on a smile and a shoeshine.

Telly Lasalle's shoes move more deliberately. He uses a walker. And he's not alone. His mother, Cynthia Lasalle, drops him off at a corner and picks him up after he works his way down the block.

Lasalle has the smile down. And he can sell.

For 20 years, he's been selling the raffle tickets that help support the ARC if St. Mary/Center of Hope, the parish's only vocational program for people with disabilities. With more than five weeks left before the drawing, Lasalle has sold enough tickets to pay for more than a quarter of the Center of Hope's annual mortgage payment on its Centerville building.

Lasalle, 45, is a person with cerebral palsy. The condition forces him to use the walker and interferes with his speech.

But "obviously people can understand him," said Kristal Hebert, the Center of Hope director. "They buy tickets from him. ...

"He's getting pretty famous out there. I just wanted people to know that despite his difficulty, his disability, he's still out there working for the center."

Lasalle puts in the hours and the work "to help raise money for the center," he said.

"Because we need it, huh?" Hebert said.

The drawing for the raffle will be Dec. 16. The 21 prizes have been donated by local businesses and range from big TVs to wine glasses.

The Center of Hope started in Morgan City in 1967, Hebert said. By 1999 the program was housed in an aging building on Centerville's Missouri Street. The raffle started as a way to raise money for a new building.

"Then the building got so old and dilapidated that we had to build," Hebert said. "So we have a mortgage."

The old building was across a parking a lot from the site of the new structure.

"While it was building, (program participants) got to watch it go up," Hebert said. "There were many times at the end when it was safe that I'd bring them in (the unfinished building) and they'd be thanking the workers for building it.

The program's operation is funded by the state-federal Medicaid program and now serves 25 participants, which Hebert said is about as much as the program's transportation can handle.

They receive training in the skills need to hold down a job, as well as in life skills such as name recognition and counting money.

They also work for wages. Telly Lasalle works in the program's thrift store.

"Sometimes when they have a doctor's appointment, I have to tell them we're closed because they get upset if they miss work," Hebert said. "They take their paycheck very seriously. Like we all do."