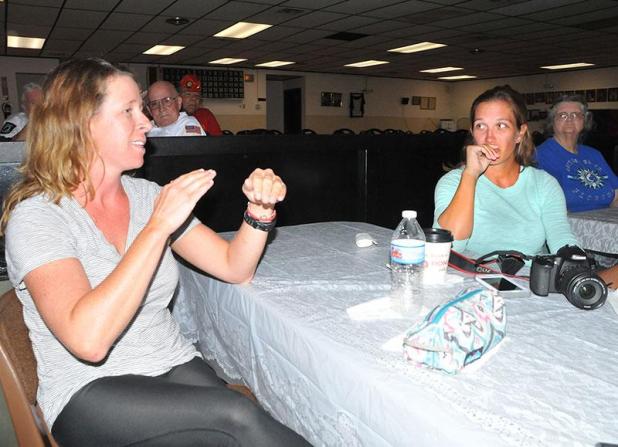 Annie Ferguson, left, and Michelle Revoir talk about their three-month paddling trip down the Mississippi River and into the Atchafalaya during a visit Saturday to Veterans of Foreign Wars Post 4222 in Morgan City. (The Daily Review/Zachary Fitzgerald) 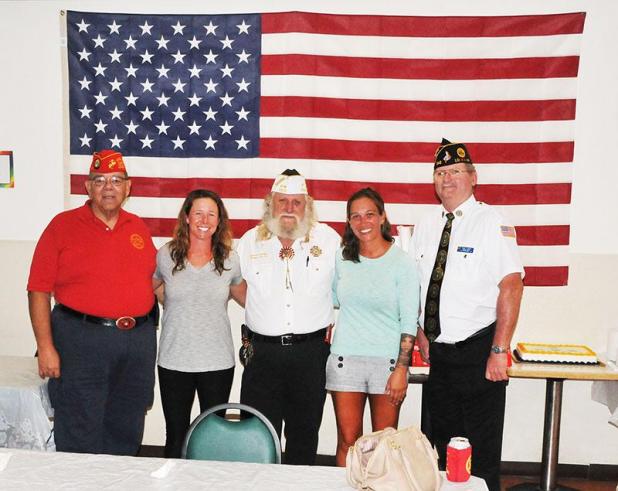 Healing on the water

Coping with the experiences of serving in combat is a monumental task many veterans face upon returning to civilian life.

Michelle Revoir and Annie Ferguson chose to paddle 2,300 miles in separate canoes down the Mississippi River as a form of therapy.

They stopped Saturday in Morgan City after paddling in the Atchafalaya River near the end of their three-month journey through 10 states that finished in St. Mary Parish.

Revoir and Ferguson, both 33, did deployments in Iraq and Afghanistan.

Revoir, who’s from Jacksonville, North Carolina, served in the Air Force for 11 years as an aerial combat photographer. Ferguson, of St. Louis, Missouri, has been in the Navy reserves for 7½ years working as an intelligence specialist and previously was a member of female engagement teams in combat.

The trip was part of Warrior Expeditions, a nonprofit organization that funds paddling, hiking and biking adventures designed to help combat veterans transition from their military service, according to its website. Revoir works as a videographer for Warrior Expeditions.

The adventures serve as “outdoor therapy” to help combat veterans cope with the struggles they face upon returning to life as civilians, Revoir said.

“Over 90 days, it has been quite a life experience educationally, physically, mentally,” Ferguson said of the paddling trip.

The duo, who had never met before beginning the expedition, began their trip July 10 at the beginning of the Mississippi River in Lake Itasca, Minnesota. They chose to branch off into the Atchafalaya toward the end of their journey and finished Sunday at Burns Point State Park on St. Mary Parish’s coastline with the Gulf of Mexico.

Revoir and Ferguson camped out most nights, but they often enjoyed the hospitality of strangers, whom they call “river angels,” staying in homes along the way.

“Meeting people like that restores your faith in humanity hugely,” Revoir said. “For especially vets, you come back, and you hate everyone. So this is a really good way to like people again.”

This voyage was Revoir’s third Warrior Expedition to participate in after doing hiking expeditions in 2015 on the Appalachian Trail and 2016 on the Mountain to Sea Trail in North Carolina.

Ferguson decided to do her first Warrior Expedition this year after learning about the program during her last deployment to Iraq because “she was looking up ways to get outside” once she got home, she said.

Revoir’s brother and her boyfriend, who are also veterans, have completed Warrior hikes, and Revoir has used this paddle trip to make more people aware of the benefits of veterans participating in such a journey.

Seeing the wildlife and scenery, people, and different cultures along the river was therapeutic, Ferguson said.

They stopped at tourist attractions and veterans organizations in many communities they passed.

Many young veterans aren’t as involved in veterans organizations as are older veterans, and Warrior Expeditions get more of the younger generation involved with those groups, Revoir said.

“It’s gotten our generation into these organizations more, which is really, really important,” Revoir said.

“You’re by yourself for eight to 10 hours a day in the middle of just absolutely gorgeous country,” Ferguson said.

Hurricane Nate delayed their finish by a day because they were planning to complete the trip Saturday.

Revoir and Ferguson were able to share their experiences with many people by documenting the trip through social media.

“The hard part with the river is that you never know what you’re going to get,” Revoir said. “And so we were fortunate and unfortunate at the same time. The river was never dangerous for us because it was so low, so slow … (but) we paddled a lot more than I thought we would.”

Most of the gear used during the expeditions is donated by sponsor companies, and participants get to keep their canoes and other equipment at the end of the trips.