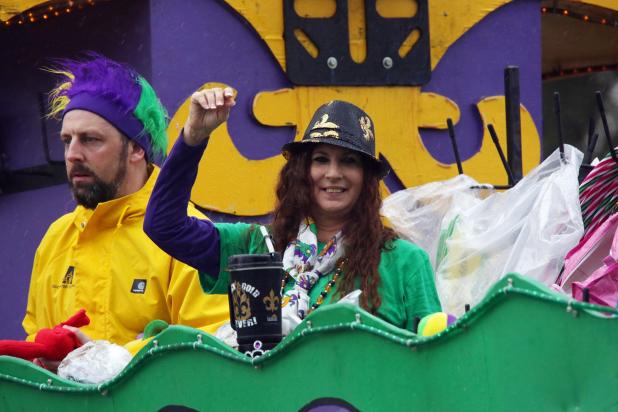 The Daily Review/Bill Decker
The Krewe of Dionysus Parade rolls in Bayou Vista in this 2019 photo, but Dionysus will parade in Berwick this year. Dionysus coronation is set for Saturday at the Berwick Civic Complex.

The Krewe of Hannibal will be celebrating its 40-year anniversary and the Krewe of Dionysus its 41st when the krewes host their balls on Saturday.
The area’s oldest krewe, the Krewe of Hephaestus, will hold its 60th celebration later in the season.
Already hosting balls are the krewes of Adonis, Nike and Galatea.
Six area Mardi Gras parades will be held in the Tri-City area beginning Feb. 21 and ending on Mardi Gras Day.
Ball patrons are reminded that tableaus begin promptly and everyone should be seated prior to the krewe’s stated start time.
Krewe of Dionysus
The Krewe of Dionysus will host its 41st coronation at 8 p.m. on Feb. 15 at the Berwick Civic Complex. Floor seating is invitation only.
A farewell appearance will be made by King and Queen Dionysus XL Thomas Galloway and Penny Galloway.
Dionysus will hold its alternating parade in Berwick this year at 2 p.m. Feb. 22.
Anyone wishing to place a unit in the parade should contact Roddy Richard at 985-498-0118.
The procession will line up on Gilmore Drive and turn on John Street, Robicheaux Street, Mount Street, Gilmore Drive, right on La. 182, Tournament Boulevard, Fairview Drive then to Pattie Drive, where it will disband at Berwick Junior High School.
Krewe of Hannibal
The Krewe of Hannibal will celebrate 40 years at 8 p.m. Feb. 15 at the Morgan City Municipal Auditorium. This is an invitation-only event.
Bidding adieu will be royalty XXXIX — King Hannibal Andre’ Palmer and Queen Cleopatra Le’Keisha Morgan.
Krewe members will participate in the Dionysus and Krewe of Amani parades.
Krewe of Amani
The Krewe of Amani celebrates 22 years with its coronation at 8 p.m. Feb. 22 at the Patterson Area Civic Center. Floor seating is invitation only.
Amani patrons are reminded that doors to view the tableau will close at 7:45 p.m. and not reopen until the presentation is complete.
Making a farewell appearance will be King and Queen Amani XXII Josh Singleton and Kizzy Gant.
Amani will hold its Lundi Gras parade at 2 p.m. Feb. 24 in Patterson. The procession will line up at Patterson High School and proceed down La. 182 (Main Street) and end at the Place Norman Shopping Center.
Krewe of Hephaestus
The oldest area krewe, the Krewe of Hephaestus, will hold its 60th carnival court at 8 p.m. Feb. 22 at the auditorium. Floor seating is invitation only.
Taking to the stage for a final appearance will be King and Queen Hephaestus LIX Chris Price and Mary Frances Aucoin.
Krewe members will parade at 2 p.m. Fat Tuesday in Morgan City. The procession will organize on Sixth and Sycamore streets and proceed down Sixth Street to Marguerite Street, Ninth Street, Clothilde Street, and Victor II Boulevard, ending at the auditorium on Myrtle Street.
Siracusa/Greenwood
The Siracusa/ Greenwood Community Mardi Gras Parade on Fat Tuesday will move to 1 p.m. this year.
Participants will line up on Siracusa Road at noon then proceed to James Street and Grace Street before ending at the Siracusaville Recreation Center.
Anyone wishing to participate or for information may call Leroy Trim or Mary Jones at 985-385-4224, or 985-759-1689.
Parade Summaries
—Krewe of Adonis: Friday, Feb. 21, 7 p.m., Morgan City.
—Krewe of Dionysus: Saturday, Feb. 22, 2 p.m., Berwick.
—Krewe of Galatea: Sunday, Feb. 23, 2 p.m., Morgan City.
—Krewe of Amani: Monday, Feb. 24, 2 p.m., Patterson.
—Siracusa/ Greenwood: Tuesday, Feb. 25, 1 p.m., Siracusa Subdivision.
—Krewe of Hephaestus: Tuesday, Feb. 25, 2 p.m., Morgan City.