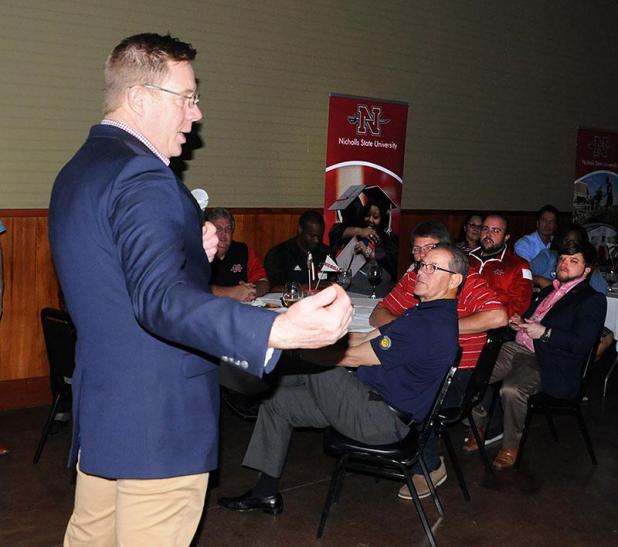 Nicholls State University is not only convenient for students in the Tri-City area to attend. It also has the programs students want.

Clune has been Nicholls president about a year.

“This is Colonel country ,” Clune said to those in attendance.

“We share common culture,” he said of Morgan City and Thibodaux.

Thibodaux is just about a 40-minute drive from Morgan City, making Nicholls the closest four-year university to the Tri-City area.

Nicholls has “everything a student could want, except engineering, and we’re working on that,” Clune said.

University officials are in the process of working to bring back engineering and computer science programs at Nicholls, so there’s no reason for students in the area to have to go away to another university, he said.

In addition to those programs, Nicholls is also trying to create an easier path for people in the area to start their postsecondary education.

Those agreements are known as two plus two agreements, meaning that they guarantee a transfer to Nicholls after a student earns an associate’s degree from SLCC in one of the four programs. The agreements went into effect for the spring 2019 semester.

Nicholls officials want students to be able to have all of the credit hours they’ve earned prior to stepping on campus in Thibodaux to count toward a degree at Nicholls, Clune said.

“(SLCC) Chancellor Natalie Harder has been wonderful working with us,” he said. “We want to be the easiest university to transfer to.”

Clune quoted a mentor of his saying “the only thing that should be hard in college is what goes on in the classroom.”

“Everything else should be easy for these students, and we’re trying to make it easy,” he said.

Clune, a Houma native and Nicholls graduate himself, has “deep ties” to the Morgan City area where his dad worked at McDermott and he regularly visited family growing up.