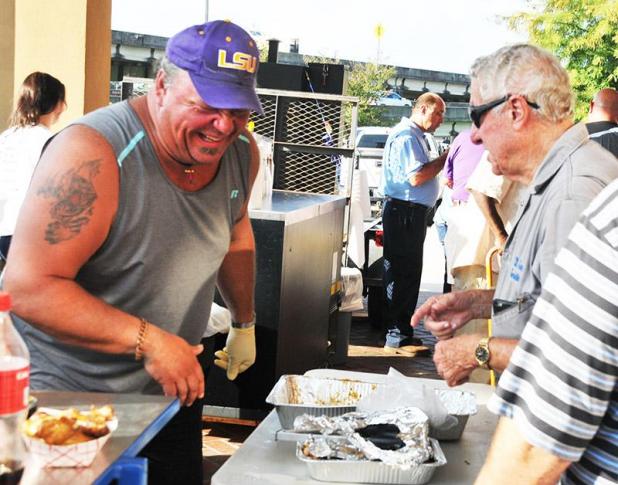 Craig Smith, left, shares a laugh with Anthony Brown while Smith serves chicken wings at Hampton Inn & Suites in Morgan City during a kickoff event last year for the Bayou BBQ Bash. This year’s kickoff party is July 11, and the bash is July 12-13 under the U.S. 90 bridge . (The Daily Review/Zachary Fitzgerald)

St. Mary Chamber of Commerce officials organize the bash. Don and Mata Tellman founded the BBQ Bash in 2012. Don Tellman died in March. The Barbecue Competitors Alliance, which sanctions the bash, honored him last year when it renamed its Pelican Trophy the Donald F. Tellman Pelican Trophy. That trophy is awarded to overall points winner in the competition series.

Organizers expect about 30 to 40 teams to compete in this year’s BBQ Bash on July 13, Chamber President Donna Meyer said. The three meat categories are chicken, pork spare ribs and brisket. Competitors in the Barbecue Competitors Alliance State Championship will start cooking early that morning with an awards ceremony at 5 p.m. The event also includes the Cannata’s Kid’s Q Competition.

The overall grand champion head cook will receive a 10-carat gold ring from Klutts Jewelers. Cooks must compete in all three meat categories to be eligible for the grand champion award. The St. Mary Parish team with the highest score will also win a trophy and the opportunity to win prize money. All cooking must be done on wood or wood products.

Entry for local St. Mary Parish and competitive cooking teams costs $165 per team for all three meats and $55 for each meat category. Corporate team entry is $250 per team and includes the company name on a T-shirt. All cooks must attend a meeting at 5:30 p.m. July 12 under the U.S. 90 bridge followed by a meal.

The chamber will hold a BBQ Bash kickoff party from 5:30-8 p.m. July 11 at Hampton Inn & Suites in Morgan City. Additionally, officials with the Louisiana Shrimp & Petroleum Festival will unveil the festival poster for the 84th edition of that festival to be held Labor Day weekend.

Family Tradition will play live music from 6-8 p.m. at the kickoff party that also includes food, drinks and door prizes.

On July 12 and 13, The Smokehouse will sell barbecue plates and Xtreme Athletics will sell hamburgers and fries.

To download a competition entry form, go to bcabbq.org. Click on Upcoming Events at the top of the page and then click on the Bayou BBQ Bash flier.