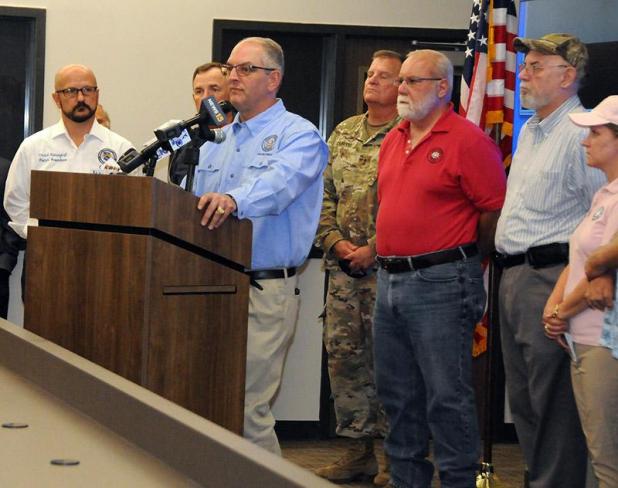 Edwards stopped at the port’s Emergency Operations Center to discuss emergency preparations with area officials and speak to media.

A hurricane warning is in effect for St. Mary, Iberia and Vermillion parishes, according to the National Weather Service. The storm is projected to make landfall Saturday in south central Louisiana as a Category 1 hurricane with winds of at least 74 mph.

Edwards declared a state of emergency Tuesday for Louisiana, and President Donald Trump declared a federal emergency for the state Thursday due to the impending storm.

“This is a very significant, severe weather event,” Edwards said.

The most difficult aspect of a storm to predict is the potential for rapid intensification, which means the storm could intensify quickly and hit land as a Category 2 hurricane, Edwards said.

Area residents should be prepared for heavy rain and wind that may cause flooded roads, downed power lines and trees, the governor said. The storm could bring up to 15 inches and more than that in isolated areas, he said.

St. Mary Parish President David Hanagriff said Thursday evening that officials had already designated shelters for local residents, but hadn’t yet determined when opening those shelters will be necessary. As soon as that information becomes available, parish leaders would release the shelter locations, Hanagriff said.

Those St. Mary Parish shelters will have water and personnel stationed at the shelters but no bedding, Hanagriff said. Parish officials planned to release more details to let people know what they should bring, the parish president said.

At the St. Mary Levee District Commission meeting that immediately followed Edwards’ news conference, Levee District Executive Director Tim Matte said the Atchafalaya River could reach 9 feet at Morgan City because of the storm and a south wind. The river was at about 7.5 feet Thursday night.

Commissioners authorized the district to declare a state of emergency allowing for expenses related to the storm.

The emergency floodgate that was installed in Bayou Chene during late May and early June to stop backwater flooding from the Atchafalaya River is still holding back about 20 inches of water, said engineer Jeff Pena of APTIM. At the peak, the structure held back about 2 feet of water.

Fortunately, that structure gives residents affected by backwater flooding about a 2-foot cushion to be able to handle more rainfall compared to what the flood they were facing a few weeks ago, Matte said.

The state has activated 3,000 National Guard personnel who are being positioned around Louisiana to assist with emergency response. State leaders believe that search and rescue operations will be necessary during and in the aftermath of the storm, Edwards said. Rapides Coliseum in Alexandria will serve as the shelter where responders will bring rescued storm victims.

Despite the severe threat that the storm poses, Edwards is confident that area and state officials are well prepared and can respond as quickly and effectively as possible, he said.

During the levee board meeting, Pena said the Bayou Chene temporary barge will be removed as soon as possible in the coming weeks.

The first phase of the permanent Bayou Chene Flood Control and Diversion Project should commence shortly. That permanent project will allow levee district officials to close a floodgate with the push of a button. Officials plan to accept bids July 30 for clearing and grubbing work at the project site.

Dredging associated with the project will be able to start after the temporary Bayou Chene structure is removed. The state has committed $75 million to the project, $50 million of which became available July 1. Officials hope to have an operational permanent floodgate by summer 2021.

They both thanked the levee district for its efforts during the flood fight and work the district has done over the years to increase flood protection in the parish. On Tuesday, engineers submitted final design Bayou Teche floodgate project that will protect from Franklin to Centerville.

Once the Bayou Teche project is done, most of St. Mary Parish will have proper flood protection, Jones said.

In other business, the levee district commission

—Accepted the district’s 2018 audit report for which auditor, Darnall, Sikes & Frederick issued the most favorable opinion on its financial statements.

—Authorized the district to expropriate some property for the Bayou Teche project.