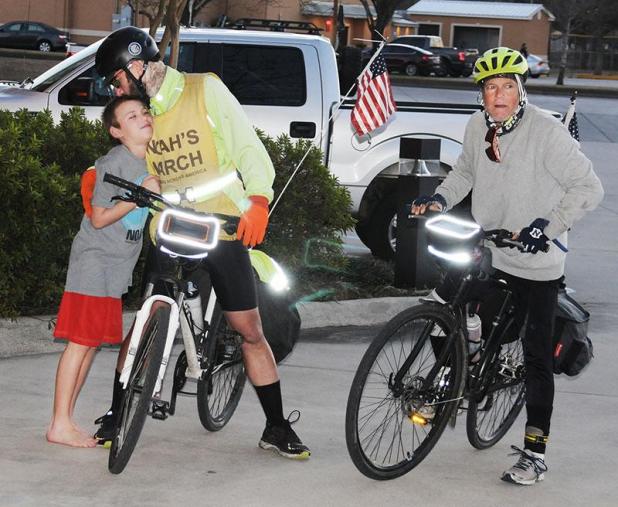 Noah Barnes, 11, hugs his father, Robert Barnes, as he and friend, Matt Nylund, arrive Monday evening on their bicycles at Hampton Inn & Suites in Morgan City. Robert Barnes and Nylund are riding their bicycles across the country to advocate for diabetes research. In 2017, Noah and his father walked across the United States after Noah, who has Type 1 diabetes, came up with the idea. (The Daily Review/Zachary Fitzgerald)

‘Noah’s March’ for a diabetes cure

To say Noah Barnes has above-average perseverance for an 11-year-old is an extreme understatement.

“Noah named it Noah’s March because people who march have a mission and a purpose,” his mother, Joanne Barnes, said. “This whole journey has just brought us closer together as a family.”

Noah became the youngest person to travel across the United States on foot, Robert Barnes said. Only about 300 people have completed documented trips across the country on foot.

Overcoming adversity is nothing new for Noah. He was diagnosed with Type 1 diabetes when he was 16 months old. He has to prick his finger and draw blood six to 10 times a day, and gets insulin shots four to 10 times every day.

Type 1 diabetes is an autoimmune condition that causes the body’s immune system to identify as a virus and attack insulin-producing cells, Robert Barnes said. In general, diabetes is a condition that causes the body’s blood sugar, also known as glucose, levels to rise higher than normal, according to the American Diabetes Association. Insulin is a hormone that the body needs to get glucose, a simple sugar used for energy, from the bloodstream into cells of the body, the diabetes association website says.

Type 2 diabetes is the more common kind of diabetes where the body doesn’t use insulin properly, the website says.

Through Noah’s March Foundation, a nonprofit organization that his family started, Noah and his family hope to raise awareness about and funds for the research being done on Type 1 diabetes in hopes of eventually finding a cure.

Shortly after finishing the walk across the United States, Robert Barnes and a man he met in Kansas during the walking trek, Matt Nylund, 53, a retired teacher and coach from Denver, Colorado, decided to ride their bicycles across the country from Santa Monica, California, to Savannah, Georgia, to further their efforts to raise awareness about diabetes.

Nylund was motivated by Noah’s story and “wanted to help out,” he said. The cycling tour will be almost 1,000 miles shorter than the walking journey.

Joanne Barnes, who is driving Noah and the family’s other children while her husband rides his bicycle across the nation, said the trip has given Noah the opportunity to meet lots of people that followed his walking journey last year. Robert Barnes, Nylund and the rest of the Barnes family came through Morgan City on Monday.

Their cycling trip started Dec. 16, 2017, and they expect to finish Feb. 17. Robert Barnes says he plans to become the first person to traverse the United States on foot and immediately follow up with a cross-country bicycle journey.

The Barnes family relied on the generosity of people who donated money and food, and strangers who allowed them to stay at places along the journey.

Families of children with Type 1 diabetes spend an average of $300 to $800 per month, with insurance, in medical supplies “just to keep your kid alive,” Robert Barnes said.

Despite the fact that diabetes affects 30 million people in the United States, the disorder doesn’t get much attention partly due to the false stigma that people with diabetes caused it themselves, he said.

Though people who have an unhealthy lifestyle are at a higher risk of Type 2 diabetes, that’s not the only contributing factor, Robert Barnes said.

He asked his parents about what a walk for the cure was, and they explained to him that the walk was to raise money for a cause.

“I asked (my dad) if I come up with a fundraiser, will you help me, thinking I was going to do a 5k or a lemonade stand,” Noah said.

Two weeks later, Noah saw a documentary about Terry Fox, a cancer patient who ran across Canada in the early 1980s to raise money for cancer research. Fox died of cancer in 1981.

Seeing that film gave Noah the idea to walk across the United States to advocate for diabetes research. He brought the idea to his parents, both of whom told him no at first and thought the idea was crazy.

He then asked his father, “Don’t you want me to be cured?”

Robert Barnes called that question from his son “a gut check moment.”

“It really kind of resonated with me, and I really chewed on it for a couple of days,” Robert Barnes said.

Robert Barnes started training Noah, having him walk outside for two to three hours at a time in the south Florida summer to see if Noah could handle the demands of traversing the country on foot.

After seeing that Noah was determined to do what he’d set his mind to, his parents went back and forth for six weeks trying to figure out the logistics of such a trip. Robert Barnes told his wife that the family could cash in their 401k, use their savings, sell some items and “really, really downsize.”

The journey has been a transformational one for Robert Barnes, too.

“I was your typical corporate, fat, 40-year-old white guy,” he said.

He now weighs less than he did when he was 23 years old.

To learn more about Noah’s journey or to donate to the cause, visit noahsmarchfoundation.org.