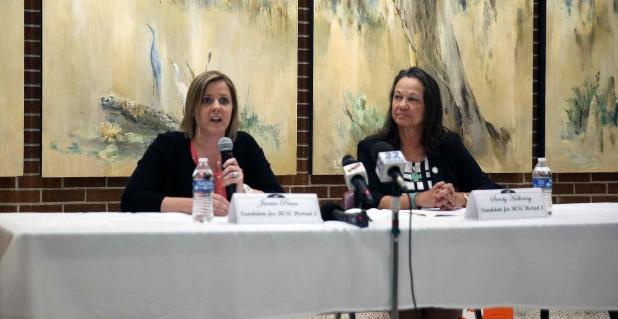 Two experienced classroom teachers with different perspectives on testing and other classroom issues met Tuesday in a St. Mary Parish Chamber forum for candidates in Board of Elementary and Secondary Education District 3.
The district includes St. Mary Parish. Appearing Tuesday were incumbent “Sandy” LeBlanc Holloway and Janice Perea, both of Terrebonne Parish.
State-mandated testing, and the time and resources it consumes, came up almost immediately in a question based on the premise that St. Mary students spend more than 180 hours a year on testing.
Perea, a fourth-grade teacher, criticized the state’s reliance on the LEAP tests, designed to measure English, math, social studies and science skills in grades 3 through 8.
“I think the LEAP should go away,” Perea said. “It’s not a valid measurement.
“It does nothing for educators. We get no feedback whatsoever. The parents get no feedback.”
Perea favors the National Assessment of Educational Progress, which measures English and math skills and takes less than a day.
But Holloway said the NAEP, pronounced “nape,” isn’t aligned with the standards developed for Louisiana public schools.
Assessments are important, Holloway said, to gauge the progress of students and schools.
But “too often the amount of time consumes educators, and they lose focus on the reason for testing,” Holloway said.
She favors limiting the amount of time devoted to testing to 2% once a year.
Another question focused on what happens when the state accountability system finds a school needs intervention. The question asked about the propriety of imposing a curriculum described as “scripted” for the 12 St. Mary schools found to be in need of intervention.
Perea found a lot to criticize. She said the Department of Education will send people to do spot checks to make sure classrooms don’t have other educational materials not in line with the imposed curriculum.
And the pacing of the state curriculum leaves little time to make sure students who need reinforcement on the lessons get extra attention, she said.
“Teachers should be able to use the skills they have,” Perea said.
Holloway emphasized that curriculum decisions should be made by local districts. But some districts lack resources or haven’t exercised effective leaderships, she said.
Another kind of leadership was the basis for another question, which centered on sometimes controversial state Superintendent John White.
Perea favors replacing White, who worked briefly as an English teacher in New Jersey before moving on to administrative posts, including the leadership of Louisiana’s Recovery School District. Perea said a state superintendent should have at least a year as a classroom teacher.
“My opponent has more qualifications for superintendent than the superintendent does,” Perea said.
Holloway stopped short of coming out directly in favor of White. But “while no one is perfect, we have started to move things in the right direction,” Holloway said.
Graduation rates are up, and so is participation in advanced placement and dual education programs, she said.
“Whether or not we’re talking about Mr. White or someone else,” Holloway said, “I would look for someone who could move us forward in the right direction,” she said.
The primary election will be Oct. 12.