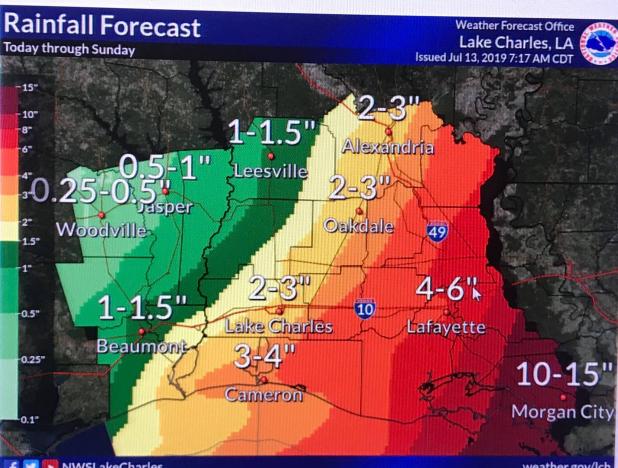 Barry weakened into a tropical storm as it came ashore Saturday near Intracoastal City. But it's still dangerous, state officials warned Saturday.

"The people of Louisiana are strong and resilient, and I can assure you we'll get through this," Gov. John Bel Edwards said after a United Command Group meeting in Baton Rouge. "However, we still face significant challenges."

As the governor spoke, St. Mary Parish was being hammered by winds of 70 mph or more. KATC reported on a Patterson mobile home that was destroyed when a tree fell on it. No injuries were reported there.

The station reported on an incident in Jeanerette was similar, except that the tree held a beehive. A family was taken to the hospital with injuries resulting from the storm and from bee stings.

Fifteen inches of rain are expected through early next week in a zone that includes St. Mary. Isolated rainfall of 20 inches or more is possible.

The storm surge warning for the St. Mary coast is for 3-6 feet.

Edwards said that contrary to reports, no Mississippi River levees have been overtopped. The only overtopping so far has in the Myrtle Grove area of Plaquemines Parish.

The Mississippi River Carrollton stage estimate is for a crest of 17.1 feet, down from a potentially dangerous 19 feet earlier this week.

Officials are watching levees on the Comite and Amite rivers in the Baton Rouge area. The Comite stage is expected to be higher than the one recorded during the August 2016 flooding.

Eleven people who stayed outside levee-protected areas of Terrebonne despite a voluntary evacuation declaration have been rescued by the Coast Guard, the governor said.

Closures have included the La. 182 bridge between Berwick and Morgan City due to vehicle damage and La. 70 near Ninth Street due to a downed utility pole.