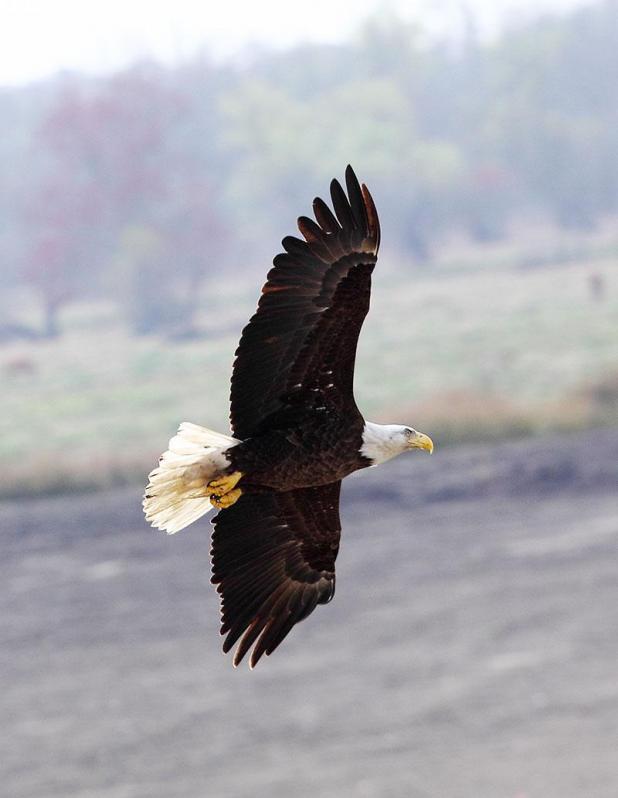 John Flores: Eagle Expo offers chance to see them in the wild

There’s an expression, “if you’ve seen one, you’ve seen them all,” that I suppose does apply to some things. To me, at least.
Take billowing white clouds, for instance. There are people who see all kinds of things from the shapes they make as they gently float over the horizon. For me, I’m like, “Sure, if you say so.”
It’s the same with the common house sparrow. Those pesky critters constantly hog all of the seed at the bird feeder we have hanging outside behind the house. They mess all over the cars and boat under the carport. And honestly, as a guy who likes to watch birds, “if you’ve seen one, you’ve seen them all.” House sparrows, to me, are nothing special or a bird to get all jazzed about.
Then there’s the bald eagle. The symbol of our nation. The amazing raptor that the Air Force’s F-15 was dubbed. The emblem of fierceness and power that embodies our nation’s sovereignty, resilience and freedom. I never – ever – get tired of seeing this creature.
Nearly every day on my way to work, I see bald eagles. I’ve seen them soaring over Berwick Bay between the bridges. I see them along the stretch of Highway 90 between the La. 70 on-ramp and the Dr. Martin Luther King Jr. Boulevard exit ramp. And, I see them perched in the oak trees along the Avoca Island Cutoff behind New Industries where I work.
Decimated by loss of habitat, illegal shooting, pollution and pesticides such as DDT, the bald eagle was pushed to the brink of extinction. In 1978, the raptor was placed on the endangered species list, and their survival was suspect at best.
I moved to Louisiana in the spring of 1984. At the time, there was only a hand full of nests remaining in the entire state. Most of them geographically in Terrebonne and St. Mary parishes.
It was the winter of 1989 I saw my first bald eagle, not in a picture, not as an emblem on the side of military aircraft and not on an episode of “Mutual of Omaha’s Wild Kingdom,” a popular television program during the ’80s.
This eagle and its mate had built a nest near Burns Point in the marsh where there were active oilfield operations going on daily. We also hunted ducks in a pond approximately a fourth of a mile away from the nest. Hence, the opportunity to view this amazing bird in the wild.
I also heard the complaints from oilfield workers how they were unable to accomplish certain tasks because of restrictions on working within close proximity of the nest.
In an interview with the late Tom Hess, a Louisiana Department of Wildlife and Fisheries biologist supervisor at Rockefeller Wildlife Refuge in southwest Louisiana, in the early ’70s, there were approximately five active nests documented by department personnel. Hess likened it to being “the last stand of the eagles.”
The Louisiana Department of Wildlife and Fisheries’ approach to protecting the eagles was simplistic. Protect the nest trees. Don’t touch or damage a nest tree, and keep a buffer around the nest tree.
There’s an old saying in the oilfield known by most rig hands, roughnecks and roustabouts. “The oilfield never sleeps.” The bald eagles’ nests interrupted business as usual for the energy companies.
According to Hess, the initial buffer zone was one mile. After a period of time and further research, department officials reduced the buffer to 1,500 feet, then 750 feet and eventually, 300 feet, where even airboats were allowed to run near a nest. Additionally, work-around permits were authorized.
There were roughly five eagle nests remaining in the late ’70s, Hess said. By the time the bald eagle was delisted in 2007, there were some 387 active nests producing young, a testament to Louisiana’s Wildlife officials’ efforts.
Next week, Feb. 13-15, the Cajun Coast Visitors and Convention Bureau will host the 15th Annual Eagle Expo in Morgan City and celebrate the bald eagle’s amazing comeback. Marybeth Lima will speak at the Friday night social event at the Cajun Coast Visitor’s Center.
Lima will talk about her book, “Adventures of a Louisiana Birder: One Year, Two Wings, Three Hundred Species.” Also, there will be the usual tours to view and photograph bald eagles along with numerous other species of raptors and wading birds in the Atchafalaya Basin, Bayou Long, Bayou Black and Turtle Bayou.
The Nature and Water Expo will be back this year along with the popular “Wings to Soar” program.
For more information or to register, you can visit www.cajuncoast.com or email info@cajuncoast.com or call 985-380-8224.
One thing, for sure, participants will get to see lots of bald eagles. And, I’m pretty sure they won’t be saying, “if you’ve seen one eagle, you’ve seen them all.”