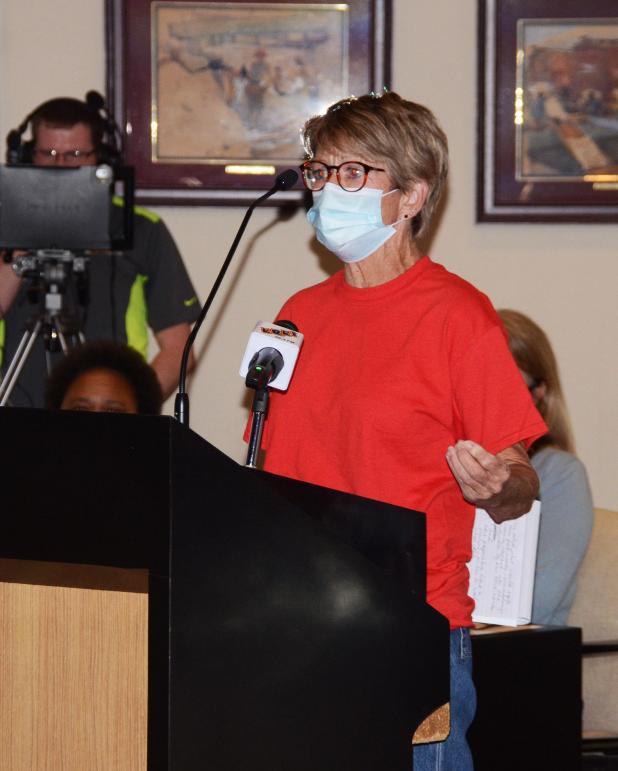 The Daily Review/Geoff Stoute
Patty Meehan, a speech-language pathologist at Raintree Elementary in Baldwin, speaks during the public comment portion of Thursday’s special board meeting. Meehan supports the school board’s decision to push the start of school back until after Labor Day.

'We just need some time': Locals react to delay in school's start

Reactions to the St. Mary Parish School Board’s decision to delay schools’ reopening to Sept. 8 were mixed, but nearly all interviewed found some positive to the pushed back reopening date.
Patty Meehan, a speech-language pathologist at Raintree Elementary who spoke during the meeting, said that she was happy with the move by the board, which pushed back the start date from Aug. 10.
“We just need some time,” she said.
Meehan said teachers are learning a new way to deliver services to their students through online learning.
“I’ve been a speech therapist 33 years, and now I’m having to learn something very new and how to deliver services using technology,” she said.
Additionally, Meehan said that parents and students need time to feel comfortable with this new way of learning before education commences.
Also, she noted the safety factor on campus with the virus.
“We’re a community,” Meehan said. “We don’t operate in a bubble. The kids come from somewhere, they come to school, they interact with us, and they go home.”
She said being comfortable with the safety comes with lowering the number of infections in the state.
“The governor said it looks like we’re on that track, so this is definitely a good move,” Meehan said.
Craig Mathews, a St. Mary Parish councilman and parent of a West St. Mary High School senior, called the move “a small victory.”
However, he said much more work needs to be done, with stakeholders having a voice in these decisions and the decisions being made earlier on and not at the last minute.
Parents and other stakeholders need to have a seat at the table to engage in these discussions early enough in the process so that there is full understanding of what the issues are and of what the ramifications are so that it eases the fears and the anxiety of our community,” he said.
However, he said he is “optimistic” because the board’s move was “definitely a step in a forward direction.”
Still, he thought the school should not be opened in person within the next four to six weeks because of the state’s and parish’s COVID numbers.
“It should be a 100% virtual only option at least for the first nine weeks,” said Mathews, whose son will be participating in the virtual learning program.
Nelvin Coleman, a grandparent of students at Centerville and in Patterson, was critical of the school system, saying they were “abusing” students for money by sending them to school and were not concerned about their health.
“They’re going to come to school, mingle and jingle, get home and bring it to” family, she said.
She said that school should be virtual only until January, and said her grandchildren will be participating in virtual learning.
Public schools receive state and local government funding, primarily through the state’s Minimum Foundation Program, St. Mary Parish Teresa Bagwell said.
She said this funding is mainly based on the school system’s enrollment in October and February.
“Students enrolled in the virtual option currently being offered by districts across the state remain students of the school system and have the ability to return to their brick and mortar school if they choose to do so,” she said. “Consequently, there is absolutely no truth to the rumor being purported that school districts would be economically impacted in any way by students being educated through the district’s virtual option.”