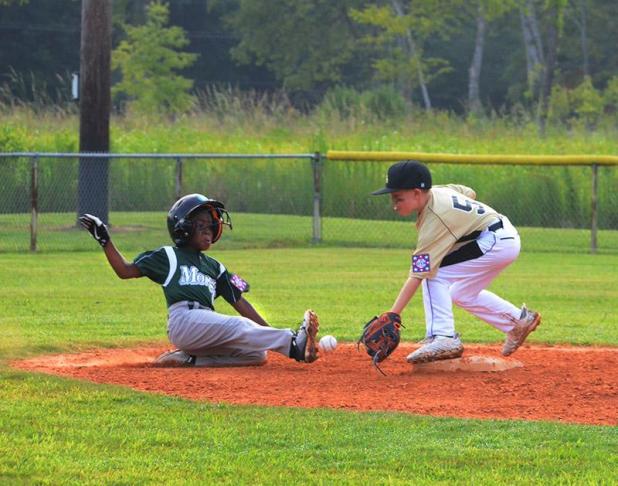 Daily Review File Photo
St. Mary Central's Graham Richoux fields the ball at second base for an out while Morgan City's JeArius Bias slides back to the base. Morgan City and St. Mary Central each have said they will be holding baseball seasons this year.

The Morgan City Recreation Department will be holding T-ball, baseball and softball seasons, beginning in mid-June, to give youngsters an opportunity to still play despite the COVID-19 pandemic that delayed the typical start of the season.
Morgan City Recreation Director Seth Thomas said the league is contacting those who have signed up and is taking new registrations, too, until May 26.
Thomas said teams will be picked on May 27, practice will begin June 8 and the season will start June 15.
All games will be played at Complex Park and the adjacent Cypress Park, with games possibly scheduled for Mondays through Fridays as Thomas said the city would like to have a full schedule completed. The season will end around the end of July.
“We’re looking to play maybe a 14-game schedule in all of the leagues,” Thomas said.
To help with safety during the pandemic, the league will practice social distancing, and everyone who is required to use helmets in their league will have to use their own, Thomas said. T-ball, which Thomas said uses a softer ball, will not be required to use helmets this year.
Thomas said the windscreens in the outfield have been removed so fans can watch the game from the outfield this season.
“We will have a list of guidelines for everybody to follow,” he said.
Those that don’t feel comfortable playing this year that already signed up can have their money refunded, Thomas said.
“We feel like outside activity would help rather than being in a gym or something like that,” Thomas said. “That’s why we’re going forward, but we’re going to take all the precautions to make sure everyone’s safe.”
While the city was scheduled to host the 10-year-old Louisiana Dixie Youth North and South Regionals this year, they will try to hold them next year if things have returned to normal, Thomas said. Originally, Morgan City was going to host it last year, but Hurricane Barry wiped out those plans.
In St. Mary Central’s baseball league, which includes Berwick and Patterson, board member Duane Lodrigue said that the season is scheduled to start for T-ball and baseball.
He said there won’t be any tryouts.
Lodrigue said practice would begin around June 1.
Participants who signed up have been contacted, and about a 50% response has been received with 95% of those responding saying they are interested in playing this season, Lodrigue said.
While registration is closed, those who may be interested in playing should contact the league via its Facebook page, St. Mary Central Dixie Youth, or by sending a message to stmarycentral@gmail.com to see if there are any spots remaining.
As for safety guidelines, Lodrigue said they would follow whatever guidelines are given by Dixie Youth.
“We’re waiting on Dixie Youth guidelines to be sent to us,” he said.
The season likely will last until the end of July, Lodrigue said.
“We want to get at least eight to 10 games in,” he said. “Eight games minimum, We’d like to get 10 games in.”
Games are scheduled to be played at the Bayou Vista Community Center, but other fields may be used, too, to prevent large clusters of people.
Refunds will be available to those who are no longer interested in playing.
Lodrigue, who is on the Town of Berwick’s Recreation Committee, said that the Berwick-Bayou Vista Softball League Board will be scheduling a meeting this week to hammer out specifics on their season.
They will be contacting participants who already have signed up for the season to see if they still are interested in playing.
Lodrigue said he doesn’t think tryouts will be held, and the season may begin around the third week in June. It likely would last until the end of July.
All games will be held at the Berwick Civic Complex, and safety guidelines from appropriate governing bodies for COVID-19 will be adhered to, Lodrigue said.
For more information, contact the Town of Berwick and more information will be available on the town’s Facebook page soon.
In Amelia, St. Mary Parish Recreation District 1 will meet Tuesday to determine if T-ball, baseball and softball will be offered this year, Amelia Recreation Center Manager Mike Beadle said.
Anyone with questions can call the Amelia Recreation Center at 631-2032.
If no season is held, Beadle said sign-up fees will be refunded.
In Patterson, a meeting will be held Thursday to look at guidelines in light of the pandemic and will provide more information about whether a season will be held, the league said in a Facebook post.
Refund requests should be sent to the child’s coach or a board member with the child’s full name and age.