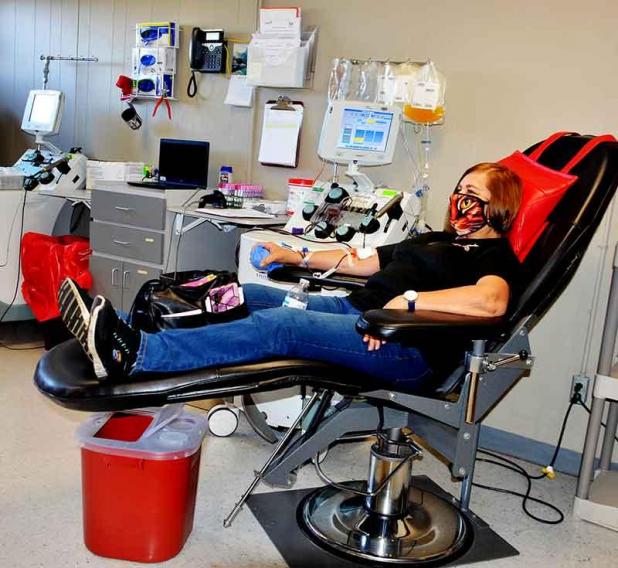 The Daily Review/Geoff Stoute
Myrian Manuel of Berwick donates platelets for cancer patients Tuesday afternoon at Vitalant’s Morgan City office. In addition to blood and platelet donations, the blood service is encouraging anyone who has recovered from COVID-19 to donate convalescent plasma to help those who are ill fight off the disease.

Convalescent plasma, a key component to help those fighting COVID-19, is being sought locally and nationwide.
The plasma, which comes from those who have recovered from the virus, is used to help those battling the virus attempt to overcome it, Teche Action Clinic Chief Executive Officer Dr. Gary Wiltz said.
In an undated letter from this month appealing to faculty and administrators at the country’s colleges and universities to encourage and support blood drives, U.S. Surgeon General Dr. Jerome Adams noted that 8.6 million-plus have recovered from COVID-19, and over 350,000 Americans have received treatment from COVID-19 Convalescent Plasma, or CCP.
“The nationwide increase in COVID-19 infections has caused a massive spike in demand for CCP,” Adams wrote. “That demand is quickly approaching more than 30,000 units per week.
“Currently, we are on par for collecting 30,000 units/week, but with increasing demand, it becomes more challenging to support the need,” he added. “Current collections may not meet the demand as cases continue to rise exponentially over the next several weeks.”
Vitalant Com-munications Manager Stephanie Kizziar said, the number of people who have donated convalescent plasma through Vitalant, when compared to the amount of people who have recovered from COVID-19 in Louisiana, is less than 1%.
“So that number, we really would love to see that number get higher, because there are so many people now who have gone through it,” she said.
Wiltz said in a study Teche Action Clinic conducted in St. Mary Parish with partners, including Centine Corp. and Quest Diagnostic, not only were people tested for COVID-19 but their blood was tested for convalescent plasma.
He said of the approximately 1,000 people tested in St. Mary Parish, over 100 or 10% had the convalescent plasma.
“I thought that was pretty impressive that 10% of the people we tested had convalescent serum,” Wiltz said.
Response was 100% among those study participants eligible to donate the plasma, too, he said.
Donating plasma to help others defeat infection is something that is not new, and it is vital in the current pandemic, the local doctor said.
“That convalescent serum can be used in a hospital setting on critically ill patients, and it can be life-saving,” Wiltz said.
While the donation of convalescent plasma is encouraged, for those who have recovered from the virus and received the COVID-19 vaccine, the donation is no longer useful, Wiltz said.
For those who have not contracted the virus, he said the vaccine is key rather risking gaining immunity through contracting the virus because individuals don’t know how their body will respond to the virus, including death.
“You don’t want to play Russian roulette,” Wiltz said. “It’s better to get the vaccine that’s 95% effective.”
And despite having the convalescent plasma, those who have had the virus should get the vaccine, too, he said.
Those who wish to donate through Vitalant, the local blood service, can schedule an appointment at www.vitalant.org/.
Patients can donate in seven-day intervals, but they must be recovered from COVID-19 and be symptom free for a minimum of 28 days before an initial donation, the company’s website said.
An additional resource for convalescent plasma is TheFightIsInUs.org.