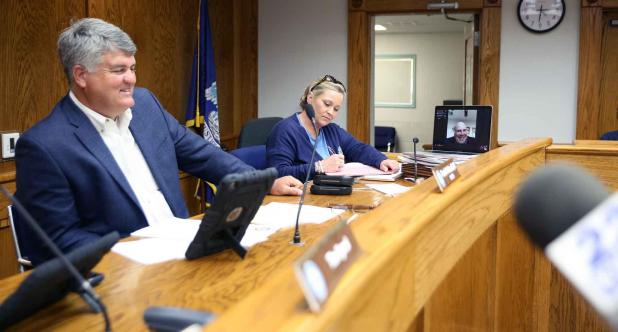 The Morgan City Council met Tuesday night before an audience that was very small and potentially much larger than usual.
The council’s meeting, with only three reporters and Morgan City police Capt. Ted Liner in the audience, was livestreamed on Facebook. One of the councilmen, Lou Tamporello, attended by way of Facetime as the council made accommodations to deal with the COVID-19 pandemic.
The council also made accommodations to help Morgan City people pay their electricity bills.
The Louisiana Public Service Commission has ordered privately owned utilities not to disconnect service for nonpayment during the crisis. But that order didn’t apply to public utilities like Morgan City’s.
On Tuesday, the council suspended disconnections, late fees and the convenience fee for online payments.
City offices are staffed but closed to the public.
The city is setting up a drop box for payments. Residents can pay their bills that way, by phone, online or by mail.
Although disconnections have been suspended, Mayor Frank “Boo” Grizzaffi urged utility customers to pay what they can.
Summer electric bills for air conditioning are coming, and the city isn’t eliminating the obligation to pay the bills.
“If you can pay something you should pay something, because the bills will be piling up,” Grizzaffi said.
The new meeting format offered the chance for livestream viewers to submit questions by email. The council received two, including one about the utility payments the council addressed with the suspension of disconnections.
The other question said information is available about avoiding the risk of COVID-19 but asked what people who have the virus should do. The answer: The first step is to contact your primary care physician and to self-quarantine.
Two positive tests for COVID-19 in St. Mary Parish have been reported by the Louisiana Office of Public Health.
One was reported Saturday night. The other was reported at noon Monday. Nearby, the state reported the first St. Martin case Monday. Terrebonne had 14 cases, and Lafourche had 16.
Also Tuesday, the council approved a resolution declaring a COVID-19 emergency in Morgan City.
The declaration may help the city government receive aid from state and federal agencies.
“The purpose of this is the unknown things the virus has impacted and what we know already,” Grizzaffi said.
In other action:
—The council approved an intergovernmental agreement with the St. Mary Parish School Board that will allow the city government to use the M.D. Shannon gym and two adjoining ballfields for city recreation activities. The city will pay $1,000 per month.
The ballfields will be used only as practice fields.
—The council approved an $85,440 expenditure to pave a short stretch of gravel road between First Street and Industrial Road. Maintenance on the road has become a headache for the city, Grizzaffi said.
The work will be performed by Gray Construction of Berwick.
The Morgan City government’s list of offices that will operate but be closed to the public includes City Hall, the Police Department, the City Jail, Juvenile Services, City Court, the Fire Department Office, Planning & Zoning, the Recreation Department, the Lake End Park office, Municipal Auditorium, and the library.
All Morgan City playgrounds, ballparks, batting cages, tennis courts, the skate park, Brownell Tower, the petting zoo and the archives are closed to the public.
Access is limited at Lake End Park RV & Cabins, where no new arrivals will be accepted until April 13.
Lake End Park’s walking trail will remain open, and the park grounds will remain open for groups of fewer than 10 people.
The city cemetery, all walking trails, the dog park, the Lake End Park boat launch and Lawrence Park, except for the playground, will remain open.