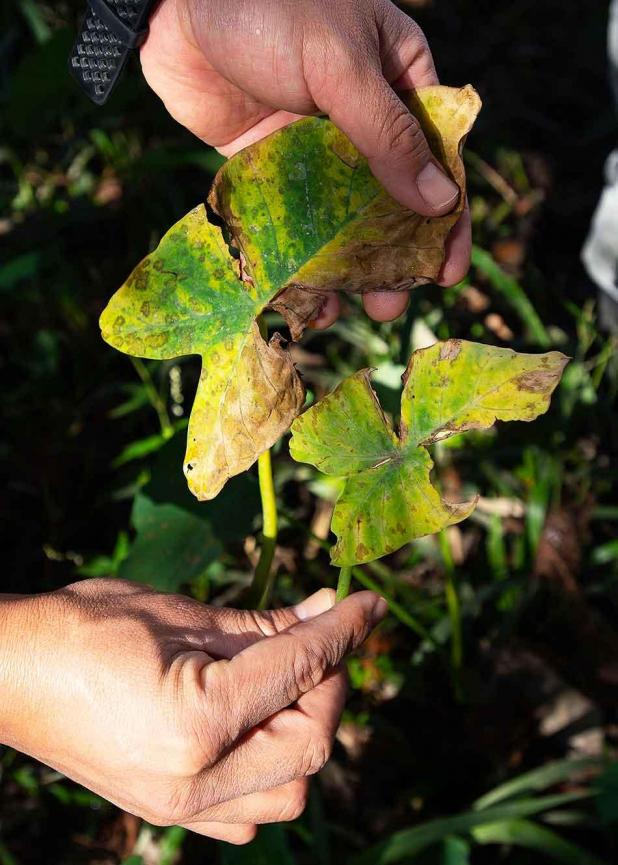 BATON ROUGE — The recent Louisiana discovery of dying wild taro, or elephant ear, has LSU AgCenter scientists expressing concern.
In the first week of October, John Hartgerink, a retired chemical engineer, found large patches of taro dying at the Bluebonnet Swamp Nature Center in Baton Rouge. Observers believe the dieback is associated with the presence of a planthopper insect and perhaps plant pathogens.
“The implications of the dieback on the long-term management of taro are unknown,” said AgCenter entomologist Rodrigo Diaz. “Our goal is to document the extent of the dieback and the distribution of the planthopper and pathogens in the southeastern United States.”
Wild taro, commonly known as elephant ear, is an aquatic plant native to Southeast Asia. The plant is present throughout the southeastern United States, where it invades wet areas. The effect of invasive taro includes alteration of riparian plant communities, decrease of recreational activities and reduction of habitat for wildlife, Diaz said.
The plant has been found in several Louisiana parishes.
The taro dieback in Baton Rouge has been associated with outbreaks of a planthopper that’s native to Asia, where it is considered a pest of taro, Diaz said. No one knows how or when it arrived in the U.S.; it was first reported in Florida in 2015.
In addition to the planthopper, taro leaves have shown mosaic symptoms and brown lesions. A virus likely causes the mosaic. The brown lesions are of unknown nature but likely caused by an unidentified pathogen.
The wild taro, Colocasia esculenta, “is considered an invasive species, but there are several ornamental varieties in the southeastern United States,” Diaz said. “Then you have Alocasia and Caladium, which are other closely related genera that include many ornamental species.”
Elephant ear or taro is a common name used for several species in the aroid family, so figuring out whether the planthopper and associated pathogens are a threat to ornamental plants is a bit tricky.
“Previous studies and field observations in Louisiana suggest the planthopper feeds only on taro. However, we do not know whether ornamental varieties of taro are susceptible to this planthopper,” Diaz said.
“That is the million dollar question, and we don’t know. We just found the planthopper in Louisiana weeks ago, and the long-term implications for our state are unknown,” he said
“But based on the problems the planthopper and plant pathogens cause in commercial taro production of Hawaii and in other countries in Asia, I would say ‘yes,’ these organisms could severely damage taro. What is fascinating about this story is how sudden the dieback symptoms are,” he said. “The planthopper could be a vector of pathogens that might be more damaging.”
Another problem is that the unidentified pathogens causing the leaf blight and mosaic may have a wider range of hosts than the taro planthopper. This means the Caladium and other species in aroid family might be affected.
“Again, we are so early in the discovery process that I am not certain about impacts,” Diaz said.
Diaz, in cooperation with Veronica Manrique from Southern University and AgCenter plant pathologist Rodrigo Valverde, is preparing a fact sheet about the planthopper and plant pathogens associated with the taro dieback.
“Our goal is to make people aware of this planthopper and pathogens attacking taro in Louisiana. More importantly, we would like the public to help us finding more evidence of the dieback,” Diaz said.
More information and pictures of the taro dieback are online at www.lsuagcenter.com/Colocasia.