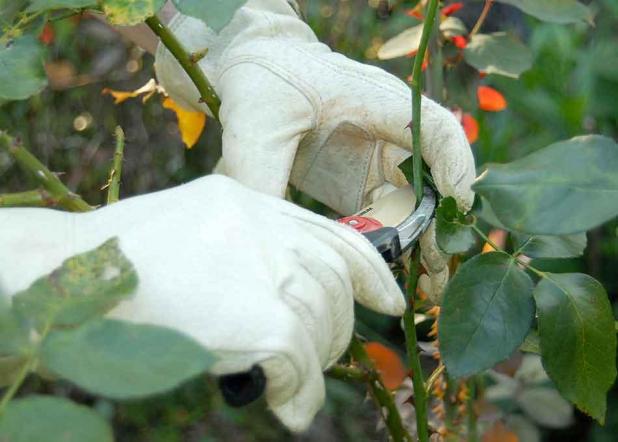 Get It Growing: Prune roses in late summer

In late summer it’s time to think about pruning our roses. Roses respond best when they receive two major prunings each year.
We prune our repeat-flowering roses, also called everblooming roses or remontant roses, based on the timing of the two major flowering periods that occur each year. The first major flowering season occurs in late spring to early summer, and the second occurs in fall. Roses do bloom in mid- to late summer, but the number and quality of the flowers are reduced.
The first pruning, done in late January (south Louisiana) or early February (north Louisiana), prepares rose bushes for the late-spring to early-summer blooming. The second pruning is done in late August (north Louisiana) to early September (south Louisiana) and ensures shapely bushes with lots of flowers in the fall blooming season.
Pruning helps control the size of rose bushes and stimulates fresh, vigorous growth that improves flowing. It also provides the opportunity to remove any dead canes.
There is no shortage of gardeners confused about how and when to prune their roses. Very good reasons exist for this confusion. Much of the standard information you read about pruning roses, particularly in older references, applies to the hybrid tea and grandiflora groups. These were the primary rose groups grown in the 20th century. When almost everybody grew hybrid tea and grandiflora roses, it was simple to give pruning recommendations.
But the rose world has changed radically. In the past 20 years, old garden roses have gained in popularity. They are a very diverse group with many different categories, such as China, noisette, Bourbon and tea (the forerunner of hybrid tea). Old garden roses, as a group, are bushier than hybrid tea roses and have a more pleasing natural shape.
Modern rose breeders did not ignore the rise in popularity of old garden roses. They have been developing and releasing new cultivars that possess many of the desirable characteristics of the old garden roses. These roses form a new group called the “landscape roses.” The Knock Out rose group and the Drift rose series are two excellent examples of modern landscape roses.
Repeat-flowering landscape roses and old garden roses do not require the annual severe pruning that hybrid tea and grandiflora roses do. And you don’t have to be so precise about how you do the pruning.
To add to the confusion, some of the old garden roses and climbing roses in our gardens are not repeat-blooming types. They are once-blooming roses that bloom in April and May and then stop and are pruned in midsummer after they finish blooming.
So when it comes to pruning roses these days, it really depends on the type of rose you have. When purchasing roses, gardeners need to pay attention not just to the cultivar name but to the group the rose belongs to as well.
Proper pruning
Use sharp bypass-type hand pruners when pruning roses. They make clean cuts and minimize damage to the stems. Wear a sturdy pair of leather gloves and long sleeves because no matter how careful you are, thorny roses can painfully puncture or scratch your hands and arms. Should you need to cut canes larger than one-half inch in diameter, you should use loppers.
Here is the basic procedure for late-summer pruning of hybrid tea and grandiflora roses. First, entirely remove all diseased or dead canes by cutting them back to their point of origin. Weak, spindly canes the diameter of a pencil or less should also be removed the same way. A good rose bush should have four to eight strong healthy canes the diameter of your finger or larger after this first step. Cut back the remaining canes to about 30 to 36 inches from ground level. Make the cuts about one-quarter inch above a dormant bud or a newly sprouted side shoot that faces away from the center of the bush.
Other repeat-blooming roses, such as China, tea, noisette, Bourbon, polyantha, floribunda, shrub, landscape and miniature roses, may also be pruned now. These roses are usually only cut back by about one-third their height and shaped under most circumstances. Dead wood is also removed.
Generally, this is best done using hand pruners to selectively cut individual branches and canes. But in the case of a mass planting or hedge, they can even be sheared with hedge shears to shape them and encourage full, bushy growth. This works well for Knock Out roses, too.
If some of your bushes are considerably overgrown, you can cut them back farther. Long, especially vigorous shoots that have grown well beyond the rest of the bush and make it look out of balance may be cut back harder than the rest of the bush.
Once-blooming roses, which include some old garden types and many climbing and rambler roses, such as Cherokee, swamp, Lady Banks, Veilchenblau, Dorothy Perkins and Blaze, should not be pruned now. If once-blooming roses are pruned hard now, they will produce fewer flowers next year. When extensive pruning of once-blooming roses is necessary, it is best done in early to midsummer after they have finished flowering.
It is far easier for you and healthier for your rose bushes if you prune them regularly twice each year. It is more difficult to properly prune a rose bush that has been allowed to grow way beyond the desired size. And it’s more stressful for the bush.