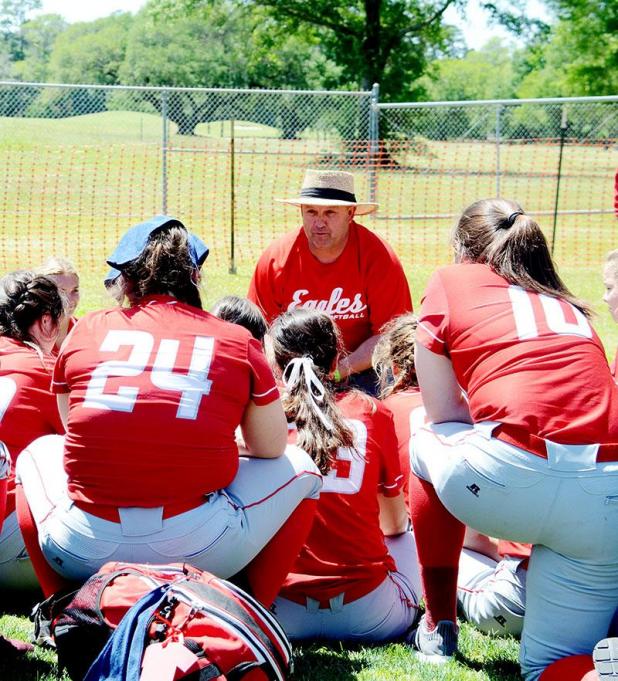 entral Catholic High School coach Joe Russo talks to his squad following its 11-3 loss to Ascension Catholic in Division IV quarterfinal action at the Allstate Sugar Bowl/Louisiana High School Athletic Association Softball State Tournament at Frasch Park in Sulphur Thursday. Central Catholic finished its season with a 21-6 record. The game was the final one for Russo, who is retiring. (The Daily Review/Geoff Stoute)

No. 6 Ascension Catholic routs No. 3 Central Catholic, 11-3, in the Division IV Quarterfinals

No. 6 Ascension Catholic pounded the softball for the better part of Thursday’s Division IV quarterfinal game against No. 3 Central Catholic.
That, coupled with Central Catholic miscues, proved to be the Lady Eagles’ downfall as they were routed, 11-3, by Ascension Catholic in Division IV quarterfinal action at the Allstate Sugar Bowl/Louisiana High School Athletic Association Softball State Tournament at Frasch Park.
“The negative part of it was we had some errors that scored some runs, and we had some passed balls that scored some runs,” said Central Catholic coach Joe Russo, who led the Lady Eagles in his final at the helm of the program. “If you take away that, I see it as a 5-3 ballgame, which that’s a very respectable ballgame, but I can’t say anything negative about Ascension Catholic.”
While Central Catholic (21-6) took a 1-0 lead in the bottom of the second inning on Kelly Russo’s RBI-single to left field, Ascension Catholic came roaring back with four runs in the top of the third inning.
The Lady Bulldogs (23-9) tied the game at 1 after a popup to second base was dropped and the throw home to try to get the runner was off target.
With runners now on second and third base, the next batter, Lauren Landry, connected on a two-run single to right field to bring home two more Ascension Catholic players for a 3-1 Lady Bulldog meeting.
While Landry advanced to third base on a groundout by Angelle Theriot, she came home to score on a wild pitch by Sara Thomas for a 4-1 Ascension Catholic advantage.
The Lady Bulldogs added two more runs via a passed ball and a wild pitch in the fourth as the Lady Eagles made two pitching changes in the frame, first turning to Haley Fontenot and then, Olivia Black, to try to silence the Lady Bulldogs’ bats.
Ascension Catholic continued to pound the softball in the fifth as back-to-back doubles by Alexia Leonard and Isabelle Abadie scored a combined three runs, prompting Russo to again make a pitching change and bring in Alanni Landry.
Ascension Catholic added another run on a single by Abigail Landry, but Landry then forced two popups and fanned another batter.
The Lady Bulldogs added a run in the sixth on Bailey Acosta’s double down the left field line, to extend its lead to 11-1.
Facing a potential early ending via the 10-run mercy rule in the bottom of the sixth, the Lady Eagles’ responded with two runs.
Shelby Mabile and Brooke Lipari led off the inning with back-to-back doubles before Fontenot grounded out to third base, plating Mabile, to make the score 11-2.
Later in the inning with two outs, Kaleigh Navarro brought home another run on a double to make the score 11-3.
“That’s what this team’s all about,” Russo said. “They know not to give up, and they’ll never give up. Hopefully that’ll carry on in a life lesson for them.”
Mabile’s double to begin the inning broke a streak of 11 consecutive retired batters for the Lady Eagles that had begun in the second inning. Several of those outs were deep fly balls and tough catches made by left fielder Emme Medine and centerfielder Bailey Acosta. Abadie also made several nice plays at third base, including the fifth inning’s final out where she stopped the ball and then made the throw to first for the final out while sitting on the ground.
“We hit the ball hard, and they made plays with (it),” Russo said. “We had at least three to the fence that I thought were out, and they caught them on the fence. The stars didn’t line up for us today, but it was a good ball game, and I got to give credit to Ascension Catholic for the job that they did.”
In Central Catholic’s last at bat, Russo and Landry recorded back-to-back singles to put runners on first and second with nobody out.
However, Ascension Catholic pitcher Hailee Rome forced consecutive popups, while a groundout to third base ended the game and the Lady Eagles’ season.
Ascension Catholic will continue state tournament play with a semifinal contest Saturday against No. 2 False River, which defeated No. 10 St. John, 4-1. The winner will meet the victor of the game between No. 1 Cedar Creek and No. 4 Catholic-Pointe Coupee later Saturday for the Division IV state championship.
As for Russo, the end has now come to his coaching career.
“It’s been a blessing to coach this group of kids and all the kids I’ve coached. … An awesome group to leave with,” Russo said. “Very, very good players, very good parents, and they’ll be missed for sure.”