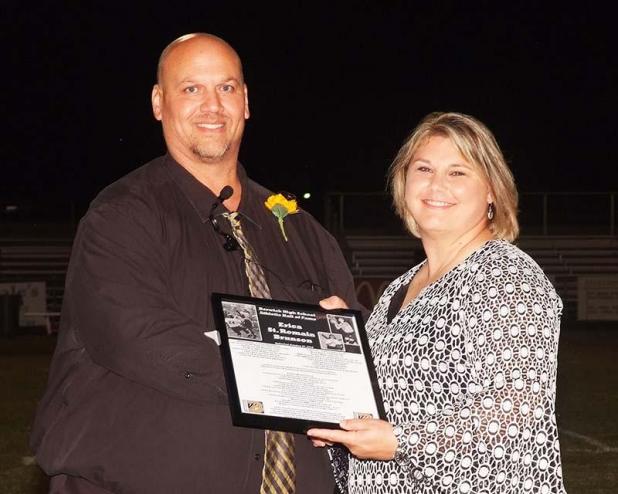 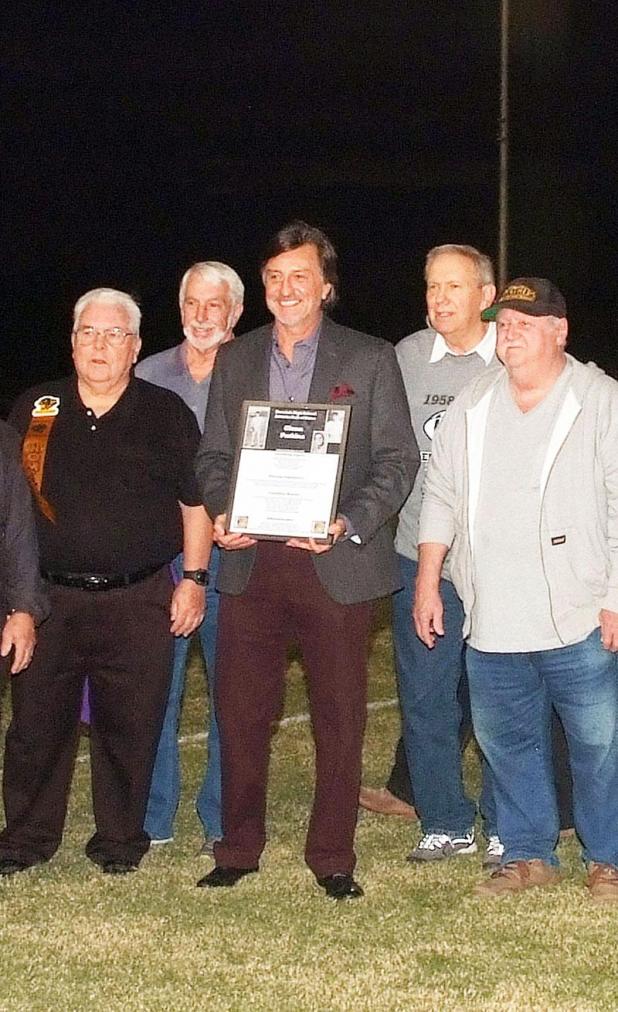 Scott Perkins, center, received a plaque recognizing his father, the late Glenn Perkins, who was inducted into the Berwick High School Athletic Hall of Fame Oct. 26 during festivities prior to Berwick's 42-20 homecoming victory against Abbeville. Glenn Perkins coached the first Panther football team and several years after that. With Perkins are ex-Berwick football players who played for his father. (Submitted Photo/Courtesy of Wade Gussman Photography)

Scott Perkins and Dr. Erica St. Romain Brunson may live almost 2,000 miles apart, but the duo’s families are closer than one may think.
Both received plaques — Perkins’ recognizing his father posthumously — as Glenn Perkins as and Brunson were inducted into the Berwick High School Athletic Hall of Fame prior to Berwick’s 42-20 home-coming victory against Abbeville Oct. 26.
Glenn Perkins and his family lived next door to Brunson’s mother’s family in Bayou Vista, and Scott Perkins was good friends with Brunson’s mother, Martha, and one of her sisters as the trio grew up.
“Actually, they moved into the house that I grew up in,” Perkins said of Brunson’s parents, noting that Brunson grew up in the same house he did.
Years later, Brunson would go on to record a decorated career as a Berwick High School athlete, excelling in basketball and softball.
The 1996 Berwick High graduate said this honor recognizes more than just her, noting her family and teammates and coaches who all helped her throughout her career.
“It’s a very humbling honor that somebody thought to nominate me,” she said.
While she said basketball was her sport going into high school, it was softball that would take her places.
Regardless, she excelled in both on the prep level.
On the hardwood, St. Ro-main was a three-time first-team all-district selection in basketball and four-time best offensive player. She earned Class 3A Academic All-District and Class 3A Academic All-State honors during the in the 1995-96 season.
On the softball diamond, she was the Team MVP three straight seasons from 1994-1996 and was named Berwick’s Female Athletic of the Year three times from 1994-1996,
Brunson was named the 1995 District 8-AA MVP, the 1996 District 6-AAA MVP and a 1995 All-State catcher.
She earned Academic All-District and All-State honors.
Additionally, she was named the West’s squad’s Most Outstanding Player in the 1996 Louisiana High School Coaches Association All-Star Game.
She said her best memory of high school came as a senior in softball when a young team of which not much was expected in terms of a postseason run advanced to the semifinals.
“That had to be the hardest-working young team that we had, so that was a big accomplishment,” Brunson said.
She went on to play softball at Louisiana Tech where she was a four-year starter from 1997-2000.
She set several school records at the time for single-season home runs and RBIs and career home runs, RBIs and fielding percentage. She also was tied for the highest career slugging average.
Brunson was Team MVP in 1998, Defensive Player of the Year and selected to the U.S. Olympic Team Camp.
In 1999, she was named Offensive Player of the year and an Academic All-American.
In 2000, she was named an NFCA All-American Scholar Athlete.
After graduating from Louisiana Tech with an undergraduate degree in 2000, she went on to receive a Masters of Physical Therapy from LSU Health Sciences Center in Shreveport in 2003 and a Doctorate of Physical Thera-py from LSU Health Sciences Center in 2009.
She and her husband re-side in Patterson with their children.
Glenn Perkins, who passed away in April 2013, was Berwick’s first head football coach and also served as athletic director from 1958 to 1964.
During his time leading the Panthers, he recorded a 10-1 mark in 1960, an 8-2 mark in 1962 and a district championship during the 1963 season in which the Panthers were ranked No. 1 in the state and reached the state semifinals.
Scott Perkins, who lives in Los Angeles, said he was “honored” to accept the award on his father’s behalf and noted approximately 10 of his father’s former players came on the field with him for the award presentation.
“One even drove in from Houston just to be there for that evening,” Scott Perkins, a 1976 Berwick alum, said. “My dad, he loved his boys. He loved his players, and they loved him. Some came to his funeral. … They just said he meant as much to them as their fathers and grandfathers. He was just like a man that really set an example for them all their lives. It means a lot to hear that. They reiterated that (at the ceremony).”
During his time at Berwick, Perkins also served as head track coach and assistant basketball coach in addition to his teaching duties.
He went on to serve as principal at Wyandotte Elementary and Morgan City High School before eventually becoming the supervisor of instruction for St. Mary Parish Schools.