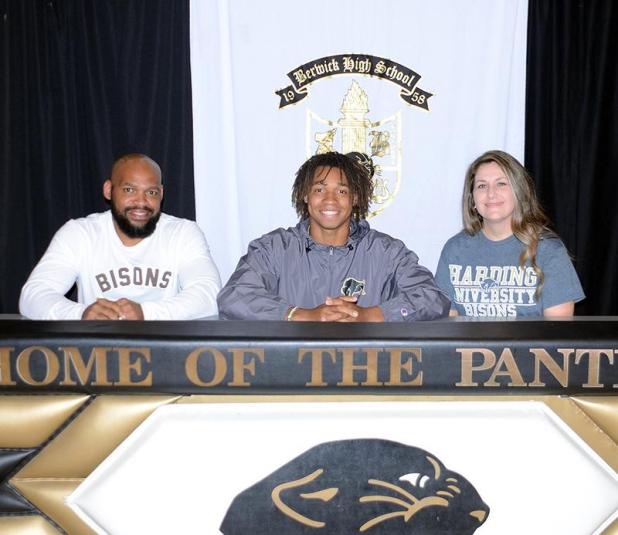 After putting up a pair of eye-popping individual game performances en route to a 2,000-plus yard rushing season, Berwick High School standout Josh Jones will take his abilities to Searcy, Arkansas, as he has signed to play with Division II Harding University.
Jones held a signing ceremony at Berwick High School Wednesday to celebrate the occasion.
“It’s a wonderful place, and not many people know about it,” Jones said of the university, which he described as a “Christian school.”
He will join a Harding team that is run-based as the squad runs the Triple Option offense.
While there is a lot of depth at running back, Jones said, “It’s like every normal school. You got to just work hard to play.”
Berwick High School Head Football Coach Mike Walker said he is happy for Jones and thinks that it will be a good opportunity for him, considering the offense that Harding utilizes.
“I think with him being one of those slot backs, with his speed, I think he’ll be a great fit,” Walker said. (He’s a) tremendous, tremendous young man. Works his tail off off the field and on the field, so I’m excited to see what he can do at the next level.”
At Berwick High, he finished his career with nearly 4,200 yards rushing and 46 touchdowns and also had another 600-plus yards receiving and eight touchdowns in four years of action. As a senior, he rushed for 2,153 yards and 27 touchdowns.
While he had a game earlier this season when he rushed for 417 yards and four touchdowns, that wasn’t even his most impressive performance of the season.
In Berwick’s regular-season finale, Jones rushed for 616 yards and nine touchdowns as Berwick defeated North Vermilion. Jones achieved the feat on 27 carries.
Of the top all-time national single-game rushing totals, the 616 yards would rank No. 6 if included on the National Federation of State High School Association’s list found on its website. It also would be the organization’s highest mark among Louisiana running backs.
Following the season, Jones was named Co-Offensive MVP on the All-District 8-3A squad and an Honorable Mention Class 3A All-State selection by the Louisiana Sports Writers Association.
He also participated in the Louisiana Gridiron Football Bowl at Louisiana College last month.
While he had success on the field, his recruitment wasn’t typical of someone with those kinds of numbers.
“Josh, bless his heart, we’ve been kind of playing the waiting game this whole recruiting process,” Walker said. “We knew he’d get the opportunity to play somewhere. We just didn’t know where that would be. I think Harding is the right fit. I think he’ll do a great job. Like I said, their scheme fits him perfectly. He’s fast. He gets north and south, so I think he’ll be a great fit for them right away.”
Jones said the ability to play college football fulfills a childhood dream.
“I kept praying to God. … I was like ‘Lord Jesus, please find me a school. I just want to keep playing the game at the next level. Keep enjoying playing the game, using my God-given talent he gave me,’” Jones said.
His prayers have been answered.