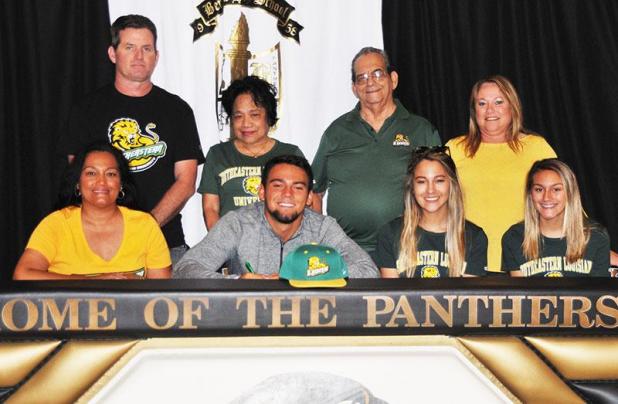 Berwick's Carver headed to Southeastern as a preferred walk-on

Berwick’s standout athlete Josh Carver can ball.
Whether it’s on the basketball court, the track or the gridiron, Carver’s very good. But coaches passed on the talented pass catcher because he often lined across from all-everything receiver Kenan Jones.
“Josh is a determined, extremely hard worker and for whatever reason, has been underestimated,” said Berwick assistant football coach Toney Linn, who also coached Carver in basketball. “He’s an exceptional athlete. He can run, he can catch, and he’s one of the toughest kids on your roster. It was awesome to have him and Kenan together.
“He (Carver) had over 1,400 yards receiving and 20 touchdowns,” Linn added. “He balled out in our last football game before being injured. I think some coaches just thought because Kenan was on one side that it was easier for him to get the job done. But what they didn’t realize is that we played several games without Kenan, and he still put up numbers.”
Carver signed on with Southeastern Louisiana University in Hammond Wednesday as a preferred walk on.
Carver was Berwick’s top pass catcher last season with 74 receptions for 1,480 yards and 20 touchdowns. He averaged 20 yards per catch.
In 2017, Carver was a first-team All-USA Louisiana Football pick, a second-team Class 3A Louisiana Football Coaches Association All-State Football team selection, an honorable mention Louisiana Sports Writers Association Class 3A All-State pick and a first-team All-District 8-3A selection.
As a junior, Carver was an honorable mention Louisiana Sports Writers Association Class 3A All-State selection and a first-team All-District 8-3A pick.
“I know how this kid works, and I’m sure he will see the field this (coming) season,” Linn said. “I’m glad he is getting a chance to prove his worth close to home. Southeastern is getting a top notch kid and athlete.”
Carver joins a Lions team in transition as longtime coach Frank Scelfo takes the head coaching reigns.
A former Patterson Lumberjack, assistant coach Tarence Calais was in Carver’s corner for the entire recruiting process.
Recruiting for Carver was busy but slowed when signing day neared.
“I had a bunch of schools, big and small, talk to me, but must of them just didn’t pull the trigger with an official offer,” Carver said. “I’m not mad, though. It got me here today.”
Carver also heard the whispers of his numbers being inflated because Jones was on the other side.
“Kenan and I were just two hard-working receivers with similar dreams for ourselves and our team,” Carver said. “So after today, we both accomplished our dreams. You see Kenan showed up for my signing today, right? He could be hanging out at LSU, but he’s here. We are brothers, and all we want is the best for each other.”
Carver and Jones helped turn around Berwick’s football fortunes the last two years.
In 2016, the duo was keys to Berwick advancing to the postseason for the first time 1996. In 2017, each helped lead Berwick not only to the playoffs for a second consecutive year, but the team’s first playoff victory in 20-plus years.
At Southeastern, the Lions play a spread offense and plan to have Carver in the mix at slot receiver.
Carver also will high jump for the Southeastern track and field team next spring. Carver finished second to Jones in the state championship meet in Class 3A earlier this month. Both former Panthers jumped 6-feet, 8-inches, but Jones won with fewer attempts.
“I feel blessed to have this opportunity, and with my friends and family behind me, I think the sky is the limit,” Carver said.