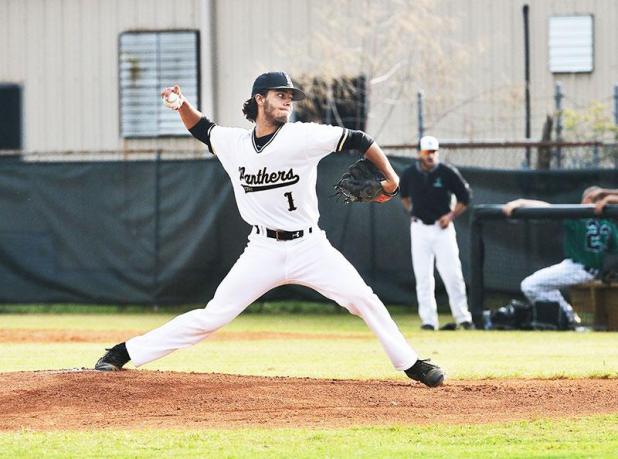 Berwick High School's Kyle Pitre, shown pitching against Eunice in game 1 of the quarterfinals, has been a major part of the team's pitching success this season. He, along with Mitchell Sanford, have led Berwick High School's pitching staff this season. The unit features quality and depth as the Panthers have combined for an ERA of 2.21. Berwick, Class 3A's fourth-ranked squad, will continue postseason play Thursday when it meets top-ranked Sterlington in a Class 3A semifinal contest at McMurry Park in Sulphur at 7:30 p.m. (The Daily Review/Mico Aloisio)

Berwick High pitching staff has been crucial to team's success

During preseason practice, Berwick High School assistant baseball coach Lud Henry, who also works with the pitching staff, watched his pitchers throwing bullpens and knew he had a talented group.
“I think our strength is going to be depth,” he recalled Monday telling first-year coach Brandon Bravata at the time. “We have a lot of pitching depth.”
With all that depth, it was simply a matter of using the season’s first month to determine who would be the team’s starters and who would emerge from the bullpen.
The Panthers certainly had some holes to replace after losing their top two pitchers from a year ago in Cameron Wiley, who signed with LSU Eunice, and Austin Price.
However, as the season is nearing its finish line, Berwick is in the Class 3A semifinals with a team ERA of 2.21 and led by two pitchers who, before this year, had minimal, at best, varsity pitching experience.
Headlining the Panthers’ rotation is senior Kyle Pitre and junior Mitchell Sanford.
Pitre had minimal pitching experience prior to this season, but nothing like the 53.2 innings he has thrown this year that have produced a 2.26 ERA.
Meanwhile, this year’s 46.2 innings thrown by Sanford are the first he ever has pitched on the varsity stage.
“If you look at Kyle and Mitchell, they really haven’t pitched a lot growing up,” Henry said. “Kyle was always known as a shortstop. Mitchell was always known as a position player. I think what really makes them special is that they have really nice, live arms, but they can also spin the curveball and the slider.”
Sanford commended the job that Pitre has done this year, calling him the team’s ace.
“With me and Kyle coming in never pitching last year, I think Kyle’s done an outstanding job taking the ace spot,” Sanford said. “We really rode him all season. He’s done a great job for us, and Coach Lud, he coming in this season just doing a great job calling the pitches.”
Pitre is 8-3 this season. He has surrendered 34 runs (17 earned) on 31 hits with 27 walks and 74 strikeouts.
“I definitely had to work harder on pitching more than anything, because I’ve always been just focused on shortstop and hitting, and I had to focus on something else this year to help the team more,” Pitre said of stepping into a leadership role on the mound.
Sanford, meanwhile, has surrendered 15 runs (five earned) on 25 hits with 15 walks and 64 strikeouts.
“We’ve definitely done a lot better than people thought we would be,” Pitre said of the pitching staff. “We had more talent last year, but I feel like we have more depth this year than we had last year.”
Bravata said he thinks having the correct mentality has helped the pitching staff.
“Mentality takes you everywhere,” Bravata said. “If you have the right mentality, you can do whatever it is you put your mind to, and those two guys have been super competitors.”
Pitre and Sanford are joined by three others who have pitched at least 15 innings. Patrick Robertson has the most experience, recording a 6-2 mark with a 2.35 ERA in 39.2 innings. He has 42 strikeouts. The other two with the most innings are Seth Canty (2-0, 23 innings, 2.91 ERA, 13 strikeouts) and Chad LaGrange (3-0, 15 innings, 1.38 ERA, 17 strikeouts)
“On a lot of teams, the guys that are in our pen would be a lot of peoples (Nos.) 1 and 2,” Henry said.
Bravata also credited the team’s bullpen for helping the team and securing some wins in huge situations.
Another key to the success lies behind the plate in senior catcher Lucas Hatch, a two-year starter at catcher.
Henry called Hatch key to the team’s pitching success.
“He is absolutely crucial, because we’re not afraid to throw curveballs in the dirt. … He’s done a fantastic job the last two years,” Henry said.
Hatch said the staff’s preseason preparation is what has made them successful this season.
“Pitre and Mitchell have both developed really good sliders that proved well in the quarterfinals,” he said.