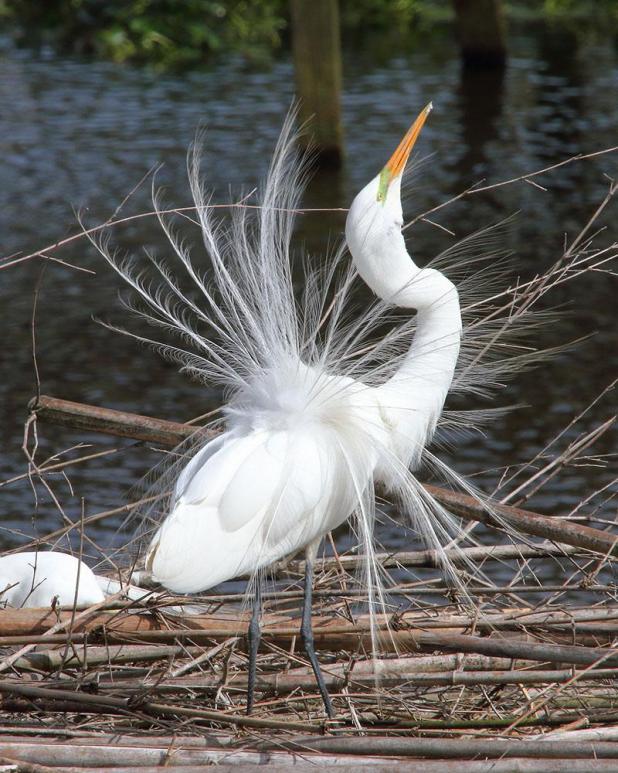 A great egret does a mating dance at Bird City in Jungle Gardens on Avery Island
(Submitted Photo/Courtesy of John K. Flores)

Ahh March! There’s no other month on the calendar quite like this particular month. There’s Mardi Gras, March Madness and the spring bird migration.
At the start of this week, March roared in like a lion when frigid temperatures hit the parish, but that didn’t deter people from taking part in a little revelry as they celebrated the days leading up to Fat Tuesday. In just about every town across coastal Louisiana there was dancing in the streets.
Let me tell you, people aren’t the only ones who dance at this time of year. March happens to be the month where amore is in the air for great egrets. The large white birds fan their tails like peacocks and bob their heads and bodies like a lot of folks along a parade route all while shouting, “Throw me something Mister!”
Late last week I contacted good friend and Secretary of Friends of Bayou Teche National Wildlife Refuge Donovan Garcia to take him up on an offer he made me during the Eagle Expo the previous weekend. Donovan asked me if I had ever been to the egret rookery on the refuge, and I told him no. So, last Saturday he was gracious enough to take my wife and I on a boat tour of our local national wildlife refuge.
Though I am a regular on the refuge during the spring, typically hiking and nature viewing, never had I gone deep into the interior by boat. My hope was to catch an egret doing a courtship dance, but it appeared they weren’t too interested in intimacy, choosing the expediency of nest building over romance.
We still enjoyed our time with our tour guide. If you spend any amount of time with Garcia, the one thing you’ll learn is he’s an encyclopedia of information related to the Franklin area. We departed one another, agreeing to check on the egrets later in the month.
March Madness doesn’t just apply to the basketball court when college teams take part in the frenzy of perhaps the purest sports tournament on the face of the planet. Basketball fans literally go crazy filling out their NCAA brackets and making predictions on which teams will make it to the Final Four. It’s great fun and something sports fans everywhere enjoy doing.
By contrast, you’ve got to be a little mad, getting up at 5 a.m., to go see some birds. But, that’s just what I did Tuesday instead of taking part in the local revelry celebrating Mardi Gras.
My goal was to drive out to southwest Louisiana and crisscross some of the roads around Gueydan near White Lake, where Mrs. Flores and I might get a chance to see a whooping crane and some other wading birds. You’ve got to drive far enough west where rice fields and crawfish ponds are the primary agriculture and not sugarcane.
As fate would have it, we did indeed stumble across a trio of whoopers feeding in a crawfish pond, and we were able to get a few pictures of them. We also saw flocks of snipe, white ibis, black-necked stilts, some great blue herons and plenty of great and little egrets.
From the White Lake area, we decided to return east and make a stop at Avery Island. The Bird City Rookery in Jungle Gardens is always an excellent spot to observe great egrets dancing and nesting in early March. The large white birds didn’t disappoint us, either.
My spouse and I weren’t the only ones to use their Fat Tuesday for a birding expedition. Terrebonne Bird Club President and Bayou Vista resident Paul Schaub got out in the woods, too.
Schaub enjoys looking at the different species of birds that are wintering in the state during March and also trying to catch a glimpse of any early spring migrants.Of his Mardi Gras trip to Bayou Teche National Wildlife Refuge, Schaub said, “I went to a few different units on the refuge. I saw 5 or 6 different sparrow species. I had a flock of cedar waxwings. I actually had a pretty good day. I saw like forty different species. The ruby-crowned kinglets are still around, your blue-gray gnatcatchers, a bunch of yellow-rumped warblers, gray catbirds – we saw a few of them – and a Hermit thrush. It was a pretty good day.”
Towards the end of March, prothonotary warblers and northern parulas will begin to show up, and when they do, they usher in a massive migration that really gets underway in earnest during the April.
Weather-wise, March roared in like a lion, and who knows what the rest of the month will be like. There’s one thing for sure with Mardi Gras, March Madness and the annual bird migration, March is a special month.
For those interested in joining the Terrebonne Bird Club, contact Schaub at schaubpaulcarol@yahoo.com or 985-519-0009.
EDITOR'S NOTE: Flores is The Daily Review's Outdoor Writer.