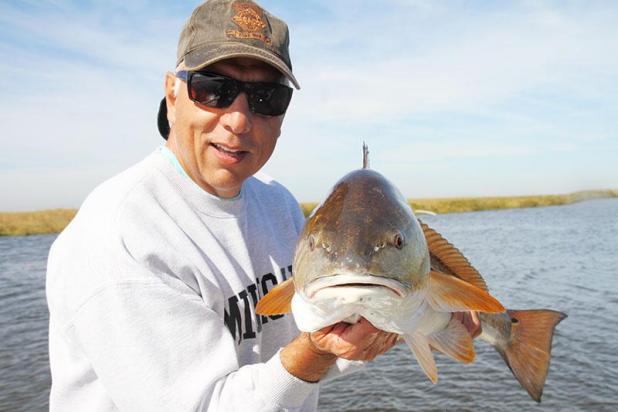 Look for redfish in deep waters this summer

Summer arrived a little sooner than expected this year with some scorching hot days during the latter part of May.
We even had the first tropical storm of the hurricane season come six days early, which is a little disconcerting, quite honestly.
What’s not disconcerting is how the saltwater fishing action heats up the further into summer it gets around these parts.
Several years ago, on a hot Friday morning in August, me and seven other outdoor writers spent a few hours with Captain Bill Lake, owner/operator of Bayou Guide Service, on Blue Hammock Bayou fishing for redfish.
It was almost too easy.
Lake and one of his boat captains had their preprogrammed troll motors holding us on specific GPS coordinates along a shallow bend in the bayou with a deep drop off towards the middle. Our two bay boats, positioned side by side, were so close together that we could talk to one another without shouting.
We simply took a piece of cracked crab fixed to a 4/0 hook and lowered it off the side of the boat.
Within seconds, “BAM!” You had a fish on.
In approximately two hours, both boats had limits totaling 50 redfish.
Absolutely dumbfounded, I asked Captain Lake what I thought was a stupid sounding question.
“Bill,” I said, “what if we hadn’t caught reds in that location? What would have been our tactic?”
“I knew we were going to catch,” Lake said.
“Yeah – I know, Bill. But, what if we didn’t,” I said, trying to rephrase my question, thinking he didn’t understand me the first time.
Lake said, “I knew the fish were there. We caught there every day this past week.”
Finally, I said more assertively, “But, what if we didn’t? What was Plan B going to be?”
That’s when I got the answer I was looking for. Lake went on to tell me that he had 18 to 20 GPS locations just like the one we fished, and if we didn’t catch immediately, we’d have gone on to one of his other holes. What’s more, the fish are in those same locations every year during the summer.
Essentially, a lot of redfish are caught by going deep during the summer. From Four League Bay to Vermilion Bay, there’s no shortage of deep bayous.
Besides the Blue Hammock, other deep-water locations worth trying around Four League Bay are Rice Bayou, Little Blue Hammock, Old Oyster Bayou and Big Oyster Bayou. Mosquito Bayou and Pellegrin Cut are also good locations.
In East Cote Blanche Bay, the deep water on the outside of the Humble Canal can be good at times, and so can the Ivanhoe Canal and outlet in West Cote Blanche Bay. I’ve caught deep-water redfish on Marsh Island in Worm Bayou just outside Lake Tom.
Bird Island Bayou on Marsh Island receives a lot of boat traffic, but plenty of redfish have been taken there.
I’ve fished Shark Island Bayou and Avery Canal and Channel with mixed results. But, when the redfish are running these deeper locations, it can be a whole lot of fun.
Cracked crab seems to be the best bait for deep-water fishing. But, dead shrimp work just as well.
However, be prepared to catch more trash fish like croakers, hardheads and gaff tops when you do.
Although jumbo croakers are worth keeping when the bite is slow, my old friend, the late Elvis Jeanminette from Jeanerette, once filleted a couple dozen croakers for him and me, leaving the scales on one side. Elvis seasoned and tossed them on his barbeque grill, and I gotta tell ya – croakers cooked like that are lip-smackin good.
When fishing deep, particularly with hard-falling tides, you’ll want to use heavier weights. Local fishing guide and tackle shop owner Ivy St. Romain taught me to use a four-ounce diamond weight on a drop rig, with a 4/0 circle hook tied with a snell knot. We caught some pretty big fish in Big Oyster Bayou rigged accordingly.
If you haven’t fished Lake Calcasieu (aka: Big Lake) in southwest Louisiana, you’re missing out on a real treat. Egret Baits President and managing partner, Ken Chaumont, mainly fishes this region. Chaumont says summer is his favorite time to target reds.
What’s more, though he does fish deep holes and drop offs, he also fishes early in the morning along the lake’s edges.
“Weather patterns have become predictable and so have the redfish,” Chaumont said. “Shorelines at high tides usually harbor lots of bait, and that’s where the reds will be. I love the calm mornings. It allows you such an easy visual on reds chasing shrimp and finger mullet along the grass.
“And, that’s when I like to use a bait that has lots of vibration like our Egret Baits Mambo Mullet,” Chaumont added. “It runs very shallow, and you can chunk it along the weed line with ease. The vibration will draw them out of the edges.”
Whatever you do, don’t let the heat keep you in the air conditioning. Get up early and go deep for some great redfish action this summer. You won’t regret it.
EDITOR’S NOTE: John K. Flores is The Daily Review’s Outdoor Writer. If you wish to make a comment or have an anecdote, recipe or story to share, contact Flores at (985) 395-5586 or at gowiththeflo@cox.net.