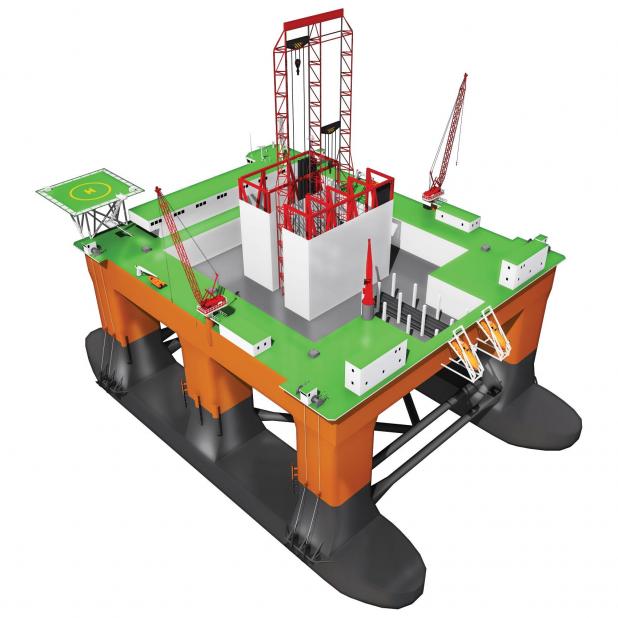 MENTONE, Texas (AP) — By late afternoon on most weekdays, the orange brick Loving County Courthouse becomes an island in a rising tide of snorting, lurching oil field trucks.
The San Antonio Express-News reports at peak congestion, the wait to make a left turn on Texas 302 toward Kermit can be a half-hour or more.
“Sometimes the traffic on State Highway 302 is backed up two miles. It’s gotten so bad that sometimes I have to get on a traffic vest and go to the intersection to direct traffic,” said Sheriff Chris Busse, 51, who took office in 2015.
“When I was a deputy here in 2008, I was lucky if I saw 20 cars on Texas 302. Now you see 1,000 in half an hour,” he added.
Long the answer to a trivia question about the least-populated county in Texas, Loving County in the 2010 census counted just 82 people. Only Kalawao County in Hawaii had fewer.
It’s now up to about 140 residents spread over 671 square miles of harsh desert terrain. Even at that density of one person per 5 square miles, it still makes Mongolia — the world’s least densely populated country — seem like Houston.
But these days, no one here is complaining of being lonely, as a tsunami of thousands of oil field workers swarms daily to this remote corner of the Permian Basin that borders New Mexico. About 1,000 to 1,500 additional workers are temporary residents who live in man-camps and RV parks.
Positioned over the Delaware Basin, a massive shale oil formation, Loving County is part of the hottest oil play on the planet.
“Right now, we’re producing somewhere near 4.5 million barrels of oil a day, and a tremendous amount of gas and gas liquids. To put that in perspective, less than 10 years ago, we were producing about a million barrels of oil a day,” said Ben Shepperd, president of the Permian Basin Petroleum Association.
“Loving County is an integral part of the phenomenal growth. I believe they have about 33 rigs running currently,” he added.
An estimated 100,000 workers have come to West Texas for the boom, which Shepperd said is expected to last for decades.
The basin play, which extends into New Mexico, has about 250,000 producing wells. It also has more than 500 working rigs, about half the national total.
And perhaps no West Texas community has been more dramatically affected than Mentone, which just a few years ago barely had a pulse.
Loving County’s only settlement is now rolling in traffic and new tax revenue, but also has parents worried about the kids and taking a simple drive.
A decade ago, before the oil boom hit, then-Sheriff Billy Hopper and Busse, who was a deputy, spent much of their time on traffic enforcement.
Now the department deals with drugs, thefts and other crimes, as well as numerous wrecks.
“Loving County has been between a boom and a bust for as long as I’ve been here. We’ve always had booms, but none in my lifetime like this. It’s unbelievable to see,” he said. “The other day it took me 47 minutes to get through a four-way stop sign on U.S. 285, going north,”
Hopper’s large concrete block house on Harris Street is a block off Texas 302 and right behind the new 24-hour convenience store and gas station.
He is lulled to sleep nightly by a droning lullaby of idling diesels and passing trucks.
“Ever since this new Valero station opened, it’s trucks running 24 hours a day, with guys sleeping in them. It’s people coming and going all the time,” he said.
One thing that everyone agrees has changed for the better is the once bitter local politics. For decades, factions and families fought to control the county government and jobs that came with it.
“When I was a kid out here, we seldom had an election where the Texas Rangers didn’t show up,” recalled Hopper.
Until 2007, when a municipal water system was installed, folks here had to truck in their drinking water.
Until recently, the county had no retail businesses, and locals drove to 33 miles to Kermit or 77 miles to Odessa to do their shopping.
Now there are about five businesses in town, including three food trucks, a Mexican restaurant and the Horseshoe Convenience store, which sells gas, groceries and beer. Lots of beer.
“It’s a madhouse. We sell about 1,200 cases a week. Bud Light is the favorite. Modelo second. And also we sell about 2,400 bags of ice a week,” said Downey Burns, 54, who manages the store for his son.
“Our biggest problem is trash. If the dumpster is full, they don’t have any problem with throwing it right on the ground. I guess that’s the polite way to put it,” he added.
Oddly, none of the beer in the coolers has a price tag. The simple reason, according to a clerk, is “They don’t care.”
An energy boom always attracts workers and fortune-seekers from near and far.
In Loving County, a while back, some Libyan truckers were briefly around. Now, a water trucking company owned by Cubans from Florida is part of the mix.
For county officials, the lean times are only a fading memory. The boom and related investments have raised the tax base from $809 million in 2010 to $8.2 billion this year, a nine-fold increase.
“We’ve had tremendous development; Numerous oil and gas wells, gas plants, pipelines, man camps, and RV parks. It’s been huge for the county,” said Jones, 68, now in his fourth term.
The county’s annual spending is also climbing rapidly, even as the tax rate goes down. The proposed 2020 budget is just under $20 million, double that of last year, and three times the 2017 budget.
Alan Sparks, 61, who came to Mentone in 1991 and works for a land trust, said locals are used to the dramatic changes that come with a boom.
“We’re complaining about the traffic, but not about the boom. Everyone has a little money in their pockets now. It’s good for West Texas,” said.
“Everyone is going to ride it out. It takes a special person to live out here. You can’t run us off.”