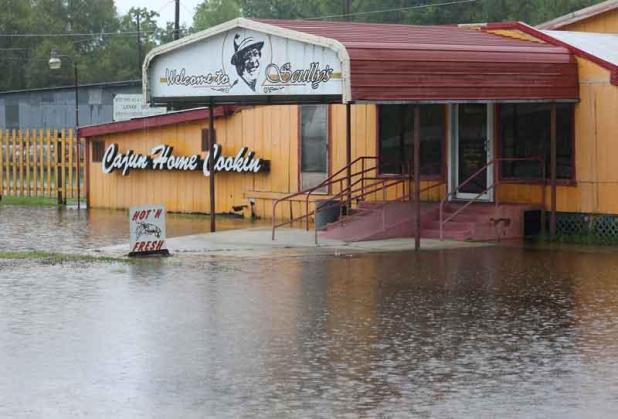 The Daily Review/Bill Decker
Heavy rain had pushed water into the parking lot of Scully's Restaurant in Stephensville by mid-morning Tuesday.

UPDATED: Rain, river rise cause bayous to fill up

Bayous already full from the rise in the Atchafalaya River are overflowing in some places due to steady rainfall that will stay in the forecast for the rest of the week.

Rain is in the forecast every day through Tuesday. Forecasters expect most of the region to get roughly 2 to 3 inches of rainfall through the rest of the week, Warphen said.

St. Mary Levee District Executive Director Tim Matte said Tuesday that the local rainfall appeared to have not had “a huge impact” on the river stage. Levee district officials are monitoring the river, but don’t expect to have to take any action to prevent flooding, he said.

“The folks in Stephensville and in Amelia are probably seeing much more of an impact in this local rainfall than the actual river stage,” Matte said.

Heavy rainfall in those areas may cause the water level in adjacent bayous to rise quickly up to 0.2 feet compared to basically no rise along the river itself, he said.

Due to the high water, a no wake zone is in effect until further notice for lower St. Martin Parish, including Stephensville and Belle River.

St. Martin officials began offering sandbags for residents of lower St. Martin Parish Wednesday morning at the park located at 3257 La. 70 in Stephensville next to Stephensville Elementary. Residents should bring a shovel and be prepared to fill their own sandbags.

Downpours of rainfall can potentially back up in the Atchafalaya Basin because water is also coming into the basin from the river, Matte said.

A slight “bump” in the water level at the junction of the Mississippi and Ohio rivers in Cairo, Illinois, may mean the Atchafalaya River doesn’t drop as quickly as initially expected, Matte said.

“It could stay with us a little while,” he said of the high water.

Berwick officials have closed floodgates at First, Pacific and Gus streets due to the projected crest in the river. Morgan City officials closed two floodgates at Brashear Avenue and floodgates at Railroad Avenue, Second Street, Freret Street and Youngs Road.

Officials with both municipalities don’t anticipate having to close any more floodgates.